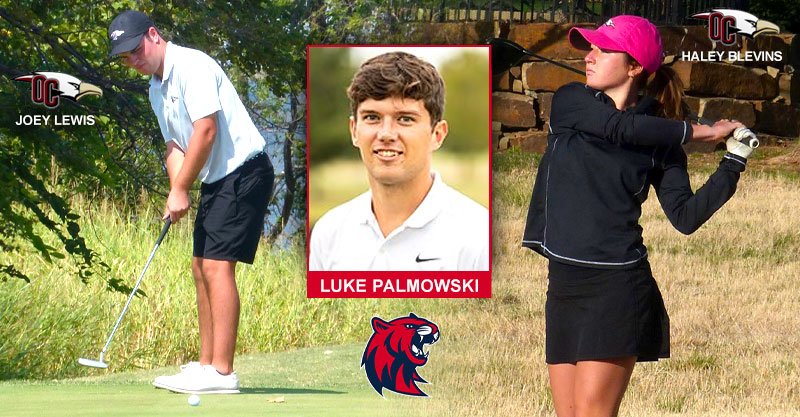 ST. JOSEPH, Mo. – Rogers State women’s golf won the Holiday Inn Express Classic in the final round of the tournament on Tuesday.

After two rounds at the par-72, 5,941-yard St. Joseph Country Club, the Hillcats claimed the team title after turning in a card of 627 (+51). This is RSU’s third-straight tournament victory.

Jessica Green led the Hillcats with a second place finish after shooting 151 (+7).

Playing as an individual, Kristin Gudmundsdottir tied Sitorus for third after shooting 156 (+12). Jessica Osden finished in 53rd with a 178 (+34).

The Hillcats will wrap up the regular season on Monday, April 4 as they travel to Wichita, Kan. to compete in the Newman Spring Invitational, hosted by Newman at the Sand Creek Station Golf Course.

BLUE SPRINGS, Mo. – Rogers State men’s golf won the NSIC Preview Invitational in the final round of the tournament on Tuesday.

After two rounds at the par-72, 6,880-yard Adams Pointe Golf Club, RSU claimed the team title with a card of 580 (+4) for the tournament. This is the Hillcats sixth-straight tournament win, dating back to the fall season.

Luke Palmowski won the individual title after shooting 139 (-5), including carding the low round of the tournament with a 67 in the first round. The senior sank 13 birdies in the two rounds.

Playing as an individual, Bradley Wright finished in a three-way tie for ninth after shooting 148 (+4).

The Hillcats will close out the regular season on Monday, April 4 as they travel to Warrensburg, Mo. to compete in The Mule, hosted by Central Missouri at the Mules National Golf Club.