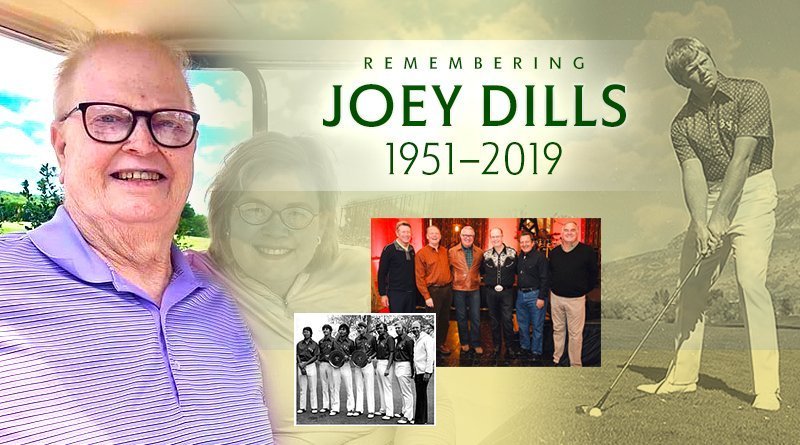 Joey Dills, one of Oklahoma’s most outstanding junior golfers who also played briefly on the PGA Tour, passed away at age 67 after an extended battle with prostate cancer. His wife Sheila Dills posted notification of his passing on her Facebook page Monday morning.

Dills, of Tulsa and a long-time member of Southern Hills Country Club, was born in 1951 in Enid and later moved to Muskogee following the death of his father in an auto accident.

He won the Class 2A state championship for Muskogee in 1967 and again in 1970 after finishing fourth as a sophomore and second as a junior. He combined raw power with an incredible touch and became particularly well known as one of the best bunker players in the country. “It could be argued that Joey Dills is the greatest junior golfer in the history of the state,” said Oklahoma golf historian and current Baylor coach Mike McGraw. “He would definitely be in my top five with players Bob Dickson, Jeff McMillian, Mark Hayes, and Kevin Tway. He was a dominant player in his era.”

Dills attended Brigham Young from 1970-74, winning the Western Athletic Conference Championship as a sophomore. He won the PGA Tour qualifying school in 1975 and stayed on tour until 1977, but admittedly spent as much time partying as concentrating on golf.

Sober and in a second marriage with the former Sheila Luguinbuel, a champion golfer in her own right, Dills ran a successful insurance company. He and Sheila have a daughter, Annie. Dills also had two sons, Billy of Houston and Joey of Tulsa, and granddaughters Isabelle and Mallory. He is also survived by his mother, Dena Dills Nowotny, a member of the Oklahoma Golf Hall of Fame.

Services will be Saturday at 1 p.m. at the Asbury United Methodist Church Mason Chapel. In lieu of flowers memorial donations may be made in Joey’s name to The First Tee of Tulsa.

Dills was driven in his final years by a desire to see the restoration of Southern Hills by architect Gil Hanse completed. Hanse paid tribute to Dills at the grand opening, saying his contributions were invaluable.

Here is a story on Dills that appeared in Golf Oklahoma last November.