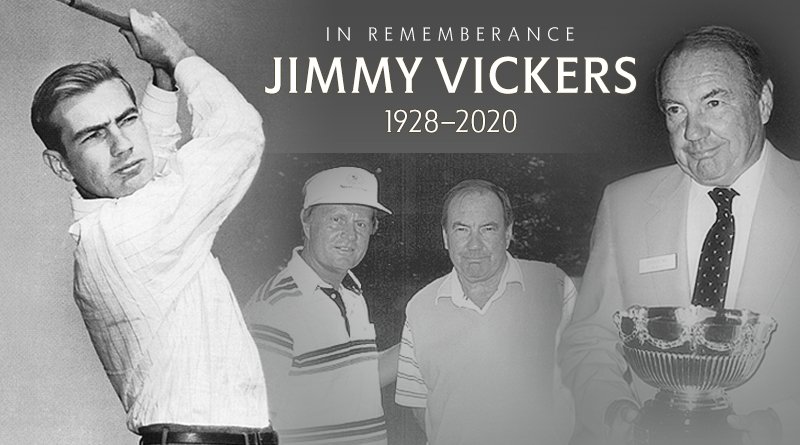 Jimmy Vickers, who won the 1952 NCAA individual title while at the University of Oklahoma, died Monday at the age of 91. Vickers, who lived in Indian Wells, California, made many contributions to golf throughout his life as both a player and a member of various advisory boards.

Vickers was one of two Sooners to win the NCAA Championship, the first being Walter Emory in 1933. Vickers stayed close to the program throughout his life and an OU fundraiser – the Vickers Cup – has been held in his name both in Norman and at various locations out west periodically over the years.

“He was very involved with our golf program and he loved the University of Oklahoma, particularly football and golf,” said OU coach Ryan Hybl. “He was a very interesting guy, a great entertainer with amazing connections to move stars and others, just a who’s who of connections. You could just feel that with his presence that he really knew how to entertain.”

Vickers was born in Wichita, Kansas, on Dec. 10, 1928, and grew up among four brothers and three sisters. Golf was the family game. Vickers had to get past LSU’s Eddie Merrins, who would eventually become famous as the head coach at UCLA (even guiding the Bruins to the NCAA team title in 1988), to win the NCAA title in 1952.

Vickers sank a long putt on the final hole at Purdue Golf Course in West Lafayette, Indiana, to defeat Merrins.

Vickers remained an amateur throughout his life. He won the 1950 Western Amateur and was runner-up to Joe Conrad in the Trans-Mississippi Golf Championship in 1953. He won the Colorado Amateur in back-to-back years (1948 and 1950), as well as the 1964 Kansas Amateur.

“I relish the amateur game,” Vickers told NCAA.org in May 2013, “Everything I ever wanted to do in the game of golf, I was able to do.”

Vickers served on the board for the Trans-Mississippi Golf Association, Western Golf Association and the Evans Scholarship Board while also continuing to support the Oklahoma golf program throughout his life.