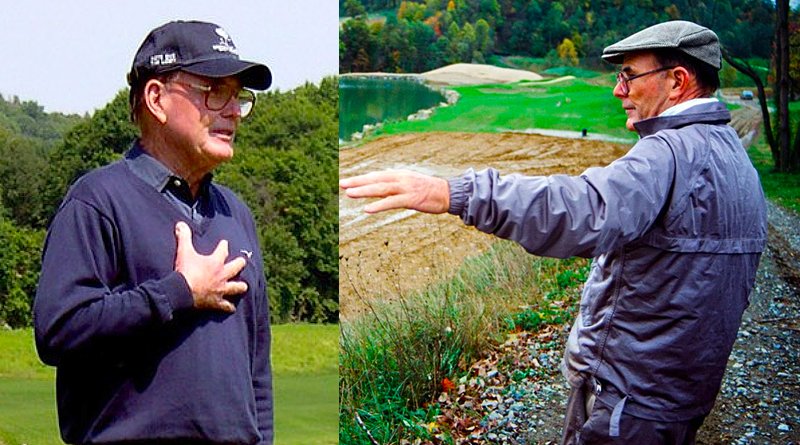 Editor’s Note: Pete Dye, who designed both Oak Tree National (1976) and the East and West courses at Oak Tree Country Club in Edmond (1981), has passed away. He worked with developer Gerald Barton and Oklahoma pros Ernie Vossler and Joe Walser to create many important designs for Landmark Land Co.  More to come from a local perspective . . .

Renowned course architect, who created such gems as Harbour Town and TPC Sawgrass and spawned a new generation of designers, dies after a long fight with dementia

The most important golf course architect of the modern era has designed his last layout. Pete Dye, 94, died Jan. 9 in Delray Beach, Fla., after a long struggle with dementia.

A native of Urbana, Ohio, he was an avid golfer who left behind a successful career as an insurance salesman in the Indianapolis area to start a second career as a golf course designer. He was joined in the effort by his wife, Alice O’Neal Dye, whom he had married in 1950 and who died in February. She was the better golfer, having played for Rollins College (where they met) and winning nine Indiana Women’s Amateurs, two U.S. Senior Women’s Amateurs and competing in the 1970 Curtis Cup. Pete, for his part, was a pretty fair player himself, having qualified for the U.S. Amateur five times, playing in the 1957 U.S. Open and winning the 1958 Indiana Amateur.

But it was his love of golf course turf, maintenance and design that provided the opening to his self-made second life. He had tended a nine-hole course in Urbana that the town had built. When he was stationed in the Army at Fort Bragg, N.C., in the early 1940s, Dye not only was responsible for maintaining the base golf course but regularly drove his superiors to nearby Pinehurst, where Pete got to meet Donald Ross and saw him play golf.