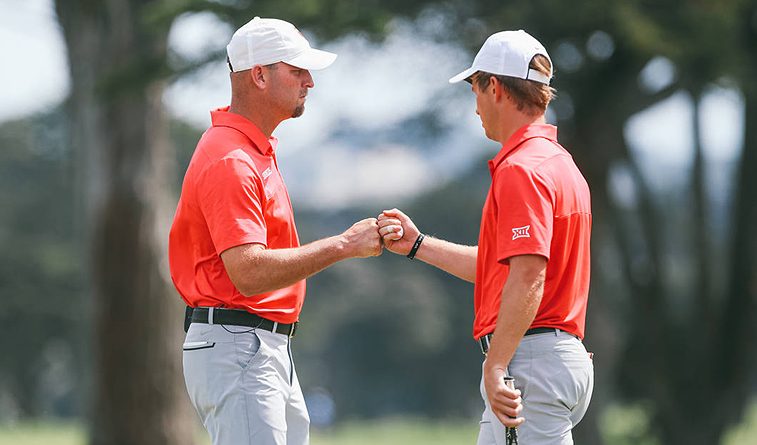 Wolff was also named the league’s newcomer of the year, marking the seventh time OSU has had the Big 12’s top newcomer. The Agoura Hills, Calif., native joins the likes of Charles Howell, Pablo Martin, Jonathan Moore, Rickie Fowler, Morgan Hoffmann and Bauchou as Cowboys to garner the award.

During his rookie campaign, he has posted three runner-up showings, a third-place finish and most recently tied for fifth place at the Big 12 Championship.

Bauchou has logged four top-five finishes on the year, while Hovland has six top-five showings highlighted by his victory at The Valspar Collegiate.

Ventura tied for fourth in the season opener at The Carmel Cup and tied for medalist honors at the Big 12 Championship.

This marks the first Big 12 Coach of the Year Award for Hybl, who recently led the Sooners to their first Big 12 Conference title since 2006. In Hybl’s nine years at Oklahoma, the Sooners have won the 2017 NCAA Championship and claimed 19 team events.

Senior Grant Hirschman and junior Brad Dalke were also named to the 11-member All-Big 12 Team. This marked the second All-Big 12 selection for Hirschman, while Dalke was recognized with his first all-conference honor.

During his senior season, Hirschman has picked up seven top-20 finishes, including six in the top 10 and three in the top five. The senior recently earned co-medalist honors at the Big 12 Championship last week at Southern Hills Country Club, giving Hirschman three career victories.

The Collierville, Tenn., native has competed in all 11 team events this season, posting a 71.06 scoring average this year.

Dalke currently leads the Sooners with a 70.41 scoring average, putting him on pace to best the lowest season scoring average in program history. The record is currently held by Anthony Kim, who logged a 71.36 scoring average during the 2004-05 season, according to records dating back to the 1993-94.

The junior earned his second career win this season, claiming the individual title at the Lone Star Invitational in March. Dalke claimed nine top-20 finishes, along with eight in the top 10 and four in the top five in 11 team events.

The All-Big 12 team was identified using the highest-ranked golfers according to the Golfweek/Sagarin rankings following the Big 12 Championship, and the team increased to 11 individuals this season to include the medalist of the championship. Dalke is currently ranked No. 40 nationally, while Hirschman is No. 18.

The Sooners return to the course May 14-16 at the NCAA Norman Regional.