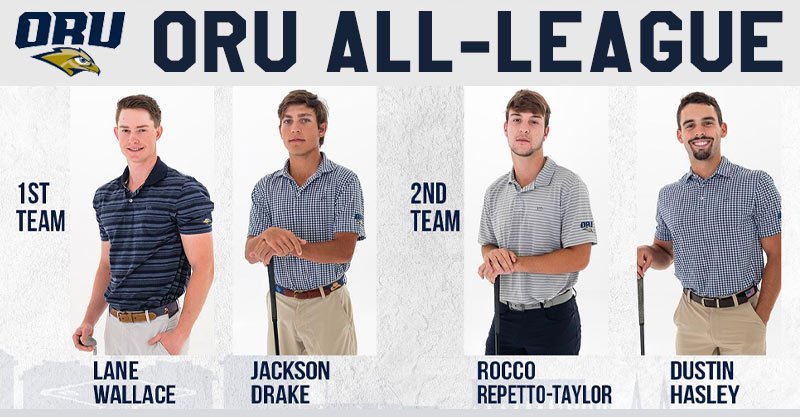 NEWTON, Kan. – Oral Roberts had a league-high four selections on the 2022 #SummitGF Men’s Golf First and Second All-League teams announced by league officials Friday. The Golden Eagles had Jackson Drake and Lane Wallace on the First Team along with Dustin Hasley and Rocco Repetto-Taylor on the Second Team.

Denver’s Jackson Solem was the only golfer to earn a repeat appearance on the first team, while the trio of DU’s Carson Griggs, ORU’s Dustin Hasley and NDSU’s Jack Johnson were all repeat second-team honorees. A vote of the league’s 10 head coaches determined the two squads.

Solem, who had a pair of top-10 finishes and owned a 72.5 stroke average, was joined on the first team by the ORU duo of Jackson Drake and Lane Wallace along with Kansas City’s George Clarke and NDSU’s Brock Winter.

Wallace led all Summit League golfers with a 71.1 stroke average after joining the Golden Eagles as a mid-year transfer from Oklahoma. Wallace picked up a pair of top-10 finishes and two TicketSmarter #SummitGF weekly honors this spring.

Clarke was second in stroke average at 71.9 and won his former school’s tournament, claiming medalist honors at the K-State Invitational in his first appearance as a Roo this past fall. He added two more top-10 finishes during his season and shared league-high honors with Solem, Hasley and NDSU’s Nate Adams, posting 14 rounds of par or better during the regular season.

Drake and Winter are the lone underclassmen on the first team. Drake competed in eight events, logging a 72.6 stroke average, which was fourth best among league golfers. He had 10 rounds of par or better and a top-10 finish.

Winter picked up a pair of weekly honors during the spring and closed out his regular season with his first collegiate victory at the Stampede at the Creek. His six top-10 finishes were tops in the league and his 73.00 stroke average paced the Bison in that category.

Griggs shot the low round of the season by a Summit League golfer when he fired a 62 (-9) in the second of the Ka’anapali Classic in early November en route to a 54-hole total of 198 (-15) to take runner-up honors. He landed on the second team for the second consecutive season.

Hasley claimed the third all-league honor of his career after posting a 73.3 stroke average. He won the Twin Oaks Intercollegiate in late March, helping ORU to the team title in that event, while also posting two other top-five finishes during his final collegiate season.

Johnson registered a 73.11 stroke average as the lone freshman on the 2021 all-league team earned a repeat nod as a second-team member. Johnson fired a 66 (-6) in his opening round of the season to finish as the top golfer in a dual match against North Dakota.

South Dakota State’s Jonah Dohrer had his best season as a collegian, posting a career-best 73.6 stroke average and leading the Jackrabbits with 12 rounds of par or better to land a spot on the second team.

Rounding out that squad was ORU’s Rocco Repetto-Taylor. He was one of two Golden Eagles to play in all 10 events en route to a 73.5 stroke average.