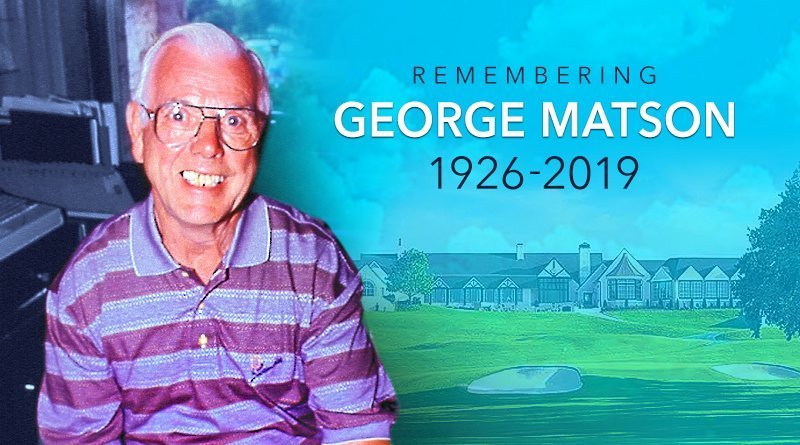 Matson, a native of Arnaugh, Northern Ireland, worked at Southern Hills for 55 years until retiring in 2004 at age 77. He was beloved by the membership for his sense of humor, steadiness, reliability and attention to detail.

“George just took care of everybody,” said long-time Southern Hills member Vic Holmes. “And he made sure to treat everyone the same, whether you were Jack Nicklaus or just an ordinary guy.”

George sat down with former Tulsa radio personality John Erling for his Voice of Oklahoma series for an enlightening interview which you can listen to here.

And here is Dan O’Kane’s story from the Tulsa World looking back at his career when he retired.

Matson’s future wife Daphne worked at the former stables at Southern Hills when it had a polo club, where her father was the stable manager. Matson was accused of finding many reasons why he had to make a trip to the stables.

He had a great sense of humor, as you can tell from this clip when he was the subject of a prank call from Roy D. Mercer, the cantankerous redneck creation of KMOD radio personalities Brent Douglas and Phil Stone.

“George was one-of-a-kind and the members truly loved him,” said Southern Hills General Manager Nick Sidorakis. “He always had a smile on his face and loved to tell stories in that Northern Irish brogue. We would always tell him we couldn’t understand a thing he was saying, but you really did want to listen to him He was a special man and will be missed.”

Former Southern Hills GM Bill Dorman worked with Matson from 1977 to 1995. The two were close, even when they were playing practical jokes on each other.

Dorman siphoned Matson’s old station wagon of all of its gas several times trying to encourage him to update his choice in vehicles before taking Daphne on a trip west. Matson responded by pulling up in a monster truck outfitted to the gills that a local dealership lent him to give Dorman a bit of his own medicine.

“He was a joy, truly a joy,” Dorman said. “He was just unflappable and treated everybody the same. He was a fixture at Southern Hills.”

Former Southern Hills Director of Golf Dave Bryan came to the club in 1989 and Matson was already an institution, having put in 35 years at that point.

“He ruled the roost,” Bryan said. “At first my assistants were scared to death of him and wouldn’t do anything without checking with George. I had to encourage them to spread their wings and take on some responsibility. He was very protective of the members and the club and it’s tradition and rightly so. He was just a wonderful man and great to work with for all those years.”

Matson joined his country’s National Guard at the age of 15 during WWII. He also served in the U.S. Army during the Korean War. He was a devoted member of First Presbyterian Church, where he served as Elder, Deacon and member of the Mariner’s Class. Matson savored life, cherished relationships and delighted in sharing stories about golf and the old country. He was preceded in death by his loving wife of 55 years, Daphne and their son, Mark.

He is survived by: son, Geordie and daughter-in-law, Laurie Matson; grandchildren, Stewart (and Jacqueline), Erin (and Adam), Andy (and Laura Beth); and great grandchildren; Carol and Georgia. A Memorial Service will be 2:00 p.m., Thursday, October 24, 2019, at First Presbyterian Church. In lieu of flowers the family requests contributions to be made to a memorial fund in George’s name at First Presbyterian Church.

Arrangements are entrusted to Schaudt Tulsa Funeral Service. Family and friends may send memories and condolences to the family online at www.schaudtfuneralservice.com