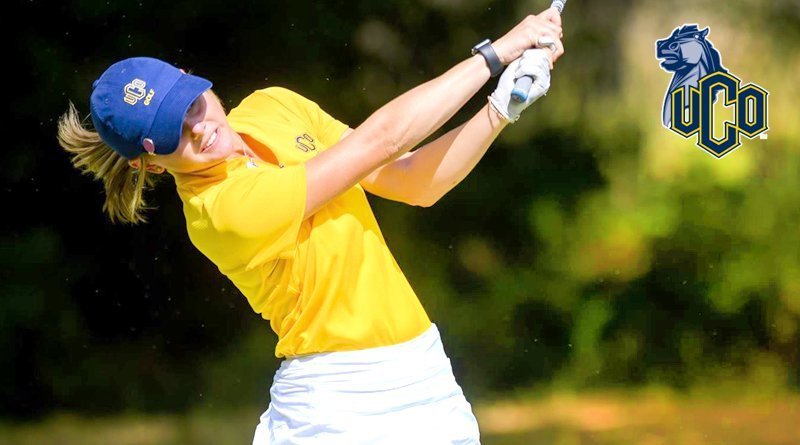 DANVILLE, Ark. (Oct. 22) – Susana Olivares and Sydney Roberts had top-five individual finishes to lead Central Oklahoma to a runner-up showing in the Arkansas Tech Invitational that wrapped up Tuesday at the Chamberlyne Country Club.

The Bronchos closed with a 316 on another tough day for scoring and ended the two-day, 36-hole tournament with a 631 total. UCO led host Arkansas Tech by one shot entering the final round, but the Golden Sun closed with a 310 to claim a five-shot victory.

Olivares shot a final-round 76 to come in second in the medalist standings with a 153 total, while Roberts – who led after opening with a 73 Monday – tied for third at 154 after shooting 81. Kinsley Hall had a 79, Emma Shelley shot 80 and Madison O’Dell 81.

“It was another hard day to score and we made too many big numbers,” said head coach Michael Bond, whose team made six double bogeys or worse against just six birdies. “We hung in there tough and battled, but just made too many mistakes.”

It was the final event of the fall season for the Bronchos, who had one win and three other top-four finishes in five tournaments.

“It was a good fall for us and I thought we made a lot of progress,” Bond said. “We’ll take a little time off and then start getting read for the spring.”

Olivares made five bogeys, one double bogey and three birdies on the final day in shooting 76 to claim runner-up honors and cap off a sensational fall campaign. The freshman started her collegiate career by placing in the top 10 in all five tournaments, winning two titles.

Roberts had her best finish of the fall and the third-place tie was the 16th top-10 showing of her stellar career.