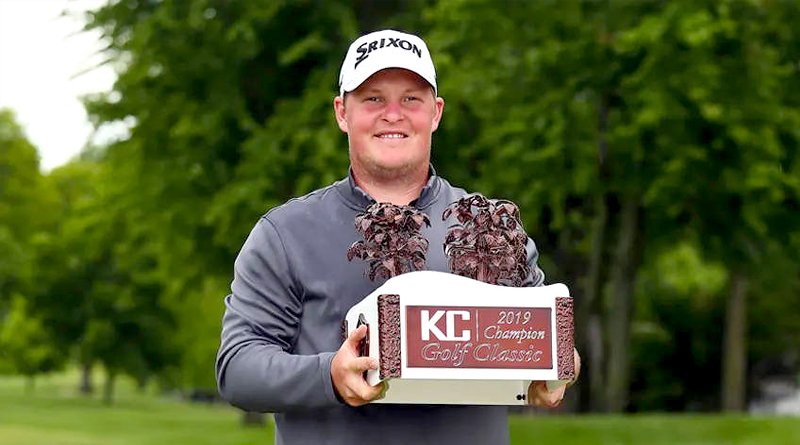 KANSAS CITY, Missouri – Former Oklahoma Sooner Michael Gellerman broke through with his first win on the Web.com Tour with a final-round 3-under 69 on Sunday at the KC Golf Classic. His 11-under total finished one stroke clear of 54-hole leader Nelson Ledesma and local favorite Harry Higgs at Blue Hills Country Club.

“You don’t know if it’s ever going to happen until it does,” said Gellerman on winning on Tour. “I thought if I played well at the right course that I could make it happen, but you’re never sure. It was just fun to battle down the stretch, not only with Harry, a good buddy, and Nelson, but to battle mentally with myself under the gun. It had been a while since I was in contention.”

Gellerman posted a bogey-free 69 during a long final round. Play was suspended due to rain and lightning in the area three separate times for a total of three hours and nine minutes. After teeing off at 9:01 a.m., he didn’t finish his round until after 5 p.m.

“The rain delays were tough,” said Gellerman. “The first one wasn’t too bad, the second one was kind of annoying, and the third one, with a lead and one hole left, I wouldn’t wish that on anyone. I tried to shut it down mentally during the delays. You can drive yourself crazy thinking about how there’s only four or five shots left to hit in a tournament, but you can’t control it.”

Just before the third rain delay, Gellerman got up and down for par at the 17th hole from what he described as a terrible position. The 26-year-old was deep in the rough about 40 yards out when he hit a pitch to seven feet and made the putt. The 17th hole played as the toughest hole on the course on Sunday.

“I hit it left on No. 17 to a really, really bad spot; it was awful,” said Gellerman, who finished second on the week in scrambling after converting 16 out of 20 chances. “I hit a decent recovery shot, and then I hit an incredible shot under the circumstances from about 40 yards out to about seven feet. I hit a pitch out of a thick rough with a lie that was hard to read, and then I hit the best putt I had all week dead center.”

Originally from Sterling, Kansas, a three-and-a-half-hour drive away, Gellerman had plenty of fan support throughout the tournament. The gallery included his parents, fiancée and friends, while his dog remained at the house down the road.

“Winning on Mother’s Day was great because I was kind of lacking on the presents, so I really needed to come in clutch down the stretch,” said Gellerman. “Having my fiancée and my mom here on Mother’s Day was awesome. I had my dad here who taught me the game and was really the only one to ever give me a lesson up until last year. It was really cool to have all of the support. Even my dog is here.”

Prior to his win, Gellerman had one top-10 finish in 42 starts on the Web.com Tour. His only previous top-10 was a T8 at the 2017 Bahamas Great Exuma Classic at Sandals Emerald Bay. He was coming off two straight top-30 finishes, but sat 75th in the Web.com Tour points standings. With the win, he rose to eighth in the points standings. He had never kept his Web.com Tour card prior to this year after competing for half a season in 2016 and a full season in 2017. He finished fifth on the Mackenzie Tour – PGA TOUR Canada’s Order of Merit in 2018.

Higgs fired a final-round 68 and hit the flagstick from off the green on two of his last three holes. His birdie chip from 20 yards on No. 16 hit the flagstick and settled one foot away, while he hit it again with his approach from 167 yards out at the par-5 18th. He had a birdie look to force a playoff from seven feet away but lipped out off the right edge. Upwards of 100 people came out in the rain to follow Higgs, a former star at nearby Blue Valley North High School.

After notching a tournament-high 17 birdies through the first three rounds, Ledesma couldn’t buy a birdie on Sunday. He finished with a lone bogey at the fourth hole and 17 pars to finish one stroke shy of the playoff. The top-10 finish is his third of the year and his best finish since a win at the 2018 LECOM Health Challenge.

The Web.com Tour will travel to Knoxville, Tennessee, next week for the Knoxville Open.