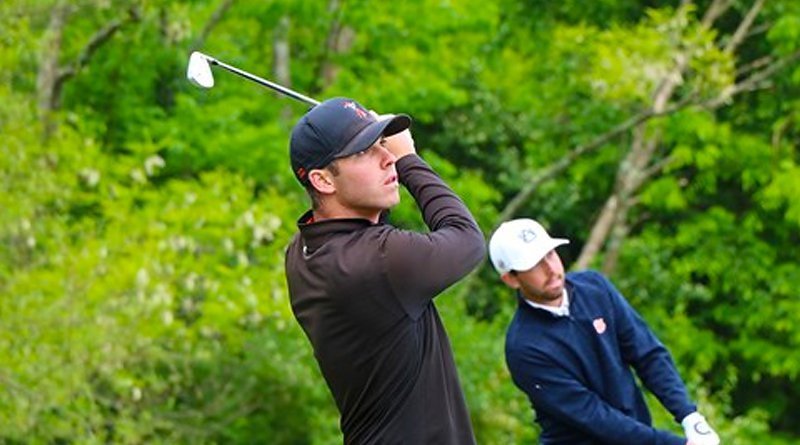 LOUISVILLE — Oklahoma State’s men’s golf team posted a 1-under 283 on Tuesday during its second round at the NCAA Louisville Regional to remain in sole possession of second place in at the University of Louisville Golf Club.

Through 36 holes, the top-ranked Cowboys stand at 7-under 561, trailing Auburn by eight strokes at the par-71, 7,217-yard layout. Baylor will enter tomorrow’s final round in third place at 568, while Iowa State is fourth at 570 and Louisville is fifth at 571.

Individually, Iowa State’s Tripp Kinney posted a 65 on Tuesday to stand at 134 and two shots clear of the field.

Viktor Hovland followed an opening 68 with a 69 to stand at 5-under 137 and tied for fourth place. The Cowboy junior made the turn at 1-under 34 before carding seven consecutive pars on his inward nine. He posted his lone birdie on the back nine at the 17th for a 1-under 35.

Sophomore Matthew Wolff put together a strong second nine on his way to a 2-under 69 to climb into a tie for 11th place at 141. Wolff, who posted a 72 on Monday, went out in 37 after putting together a front side with eight pars and a double bogey. He rallied with birdies at the 10th and 11th before closing with birdies at Nos. 17 and 18 to come home in 4-under 32.

Senior Zach Bauchou joined his teammates inside the top 20, standing in a tie for 18th place at 142 after signing for a second-round 72.

Joining his teammate at 142 was sophomore Austin Eckroat, who carded a 73 during his second round.

The Cowboys will begin their final round tomorrow at 6:30 a.m. (CST) and will be grouped with Auburn and Baylor. OSU will be looking to secure the 72nd NCAA Championship appearance in the 73-year history of the program.