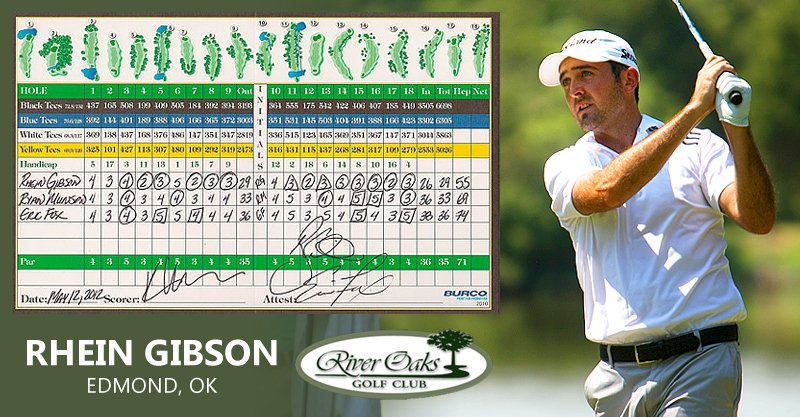 This story from the June-July 2012 issue of Golf Oklahoma

Talk about instant celebrity. A few days after Rhein Gibson shot 55, probably at least the equal of the lowest round of golf ever shot at a golf course of more than 6,500 yards, he was under siege.

Across the U.S. and particularly in his native Australia, reporters and radio hosts suddenly all knew his private cell number, as well as that of playing partner and unofficial agent Ryan Munson.

“My phone rang off the hook,” said Munson, who was trying to help his friend screen the opportunities while Gibson was back competing on the National Pro Golf Tour. “I got phone calls from people in every state. It was amazing. I don’t know how people found my cell phone number.”

Gibson estimates he did 15 radio shows and dozens of newspaper and magazine interviews. Golf Digest was planning a big story for its next issue.

Shortly after the round, Munson posted some information on the golf website Golf Pigeon. The first complete story was on www.golfoklahoma.org  a day later and sent out in an email blast to this magazine’s readers a few days later, at which point the story was going viral.

Unfortunately, while the cascade of publicity has made Gibson known to golfers worldwide, it won’t have many tangible benefits to his goal of reaching the PGA Tour, unless it is some sponsor exemptions to Nationwide Tour events. It has also not resulted as yet in any sponsorship or endorsement deals.

“My life has been turned upside down because of one round,” Gibson said. “It’s been a bit distracting for my golf, which is still how I have to make my living. I wouldn’t want this to be an every day thing, like it is for Tiger and those guys. It’s fine for now, but it doesn’t help me get better, which is what I need to be concentrating on.”

Still, the 16-under-par round featuring 12 birdies and two eagles will go down in history as one of the most impressive single rounds in golf. And it nearly didn’t happen at all.

Gibson had attended a graduation party on Friday night, stayed up late, then woke up somewhat disinterested Saturday morning, texting Munson to see if the regular Saturday game between friends was still on.

With the driving range closed after heavy rains on Friday, the trio walked to the 10th tee (they started on the back nine) and hit away after a few practice swings. Gibson made par. He then went eagle-birdie-eagle followed by five consecutive birdies to shoot 10-under 26 on the front nine.

“At that point, we were all jumping around and giving high-fives and hugs,” Munson said. “No one shoots 10 under on the front nine.”

“Yeah, there was quite a celebration after the first nine,” Gibson said. “Then we had to wait about 15 minutes to tee off on No. 1 because with split tees, there was still one group to tee off in the morning wave. It’s an intimidating tee shot and I was a little nervous waiting around. But I managed to get it in play.”

Gibson made par on holes 1 and 2, then the putter blazed again with birdies on holes 3, 4 and 5 to reach 13 under.

“I’m thinking ‘wow,’ this is pretty crazy. I can make all pars coming in and shoot 58,” Gibson said.

He did make a par on hole 15, a short-par-5 in which his second shot had a clump of mud and took off straight right, causing him to hit a provisional because he was worried that it might be out of bounds. It wasn’t and he managed a par.

The previous Saturday, Gibson had played 36 holes at River Oaks, opening with a 65 in the morning, then coming back with a course-record 60 in the afternoon. He was 11-under-par after 11 holes in that round but couldn’t keep it going.

This time he plunged all the way in, shooting 29 on his back nine.

“This was just ridiculous ball striking,” Munson said. “He had a couple of kick-ins but a lot of them were in the 10 to 15 feet range. His putter was on fire.”

“Every putt I made was dead center, whether from 30 feet or five feet,” Gibson said. “The greens were in perfect condition and the speed was perfect, about a 10. I just putted out of my mind. I had the chip-in for eagle on our fifth hole and 19 putts in the round.”

Gibson only hit six fairways in regulation but by cutting doglegs was just off in many cases and his approach shots consistently put him in great position.

“There are certain places on each green where the putts are much easier and he hit those spots all day,” said Eric Fox, his other playing partner

“Rhein has been an outstanding talent since the first day he arrived in the U.S. in 2004,” said David Lynn, coach of the Oklahoma Christian team where Gibson was a four-time All-American from 2004-2008. “When Rhein is confident, he fears nothing and that is evident in his play of late. Shooting 55 is unfathomable. Anybody that would get around that magical 59 number might be content to just get the round done, but Rhein showed how strong he is mentally by birdieing the last three holes. I am in complete awe of his round.”

“Pretty surreal,” said Gibson, a native of Linsmore on the east coast of Australia, the 2008 Oklahoma Golf Association State Amateur Champion and the 2010 Oklahoma Open champion.

“I really wasn’t nervous on those last few holes. By then, I knew I was in the 50s so it was just a matter of how low it was going to be. I would be more nervous over a 3-foot putt to make a cut.”