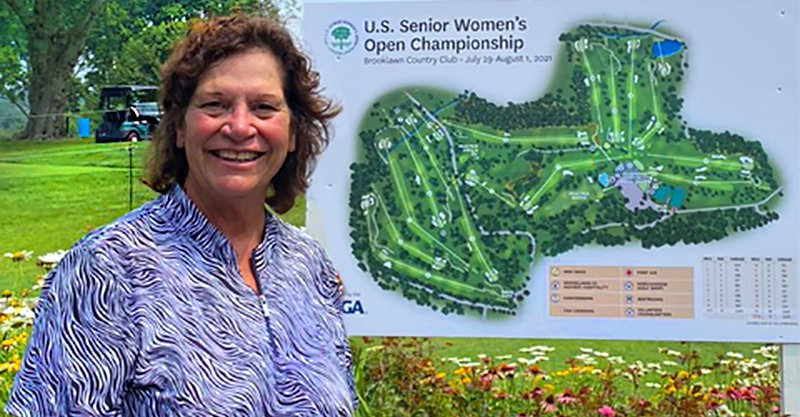 That’s literally, as in a full two-day drive, and figuratively, as in going from teaching children the benefits of golf, to competing against Annika Sorenstam, Juli Inkster, Laura Davies and numerous other legends of the game.

That’s the challenge undertaken this week by Janice Gibson, the long-time director of the First Tee of Tulsa. Gibson, who played the LPGA Tour from 1985-1997 after an outstanding career at Oklahoma State, earned her way in by tying for third in a qualifier at Wildhorse Golf Club in Denton, Texas.

It’s been a scramble since to get her game, body and mostly her equipment in shape for the national stage. She has been spending extra time before and after First Tee duties getting work in on the range. She was fitted for new clubs that have yet to arrive so will be playing with a borrowed set. And her chiropractor, physical therapist and doctor have each had duties to get her limber and fully functional.

“I’ve got a lot of people on my team,” said Gibson, whose husband David will serve as her caddy. “I don’t have eight hours a day to practice, but I’ve been working hard. It’s not so easy to do anymore. But we’re excited and absolutely thrilled to get back into competition.”

For a competitive tuneup, Gibson played in the South Central PGA Section Championship last week at Stillwater Country Club, finishing a very respectable tied for 16th after rounds of 75-72. She played a set of tees up from the men but her short game remains a strength.

“I’m not going to gain any distance at my age, so the key for me is to keep the ball in play and make putts,” Gibson said. “Chipping is very important and that’s where I feel like I can be competitive. Hopefully I can get the ball up-and-down and also roll in a few birdies.

“I’m just going to enjoy it and let the outcome be the score.”

Gibson is looking forward to seeing old friends against whom she competed for years, as well as some of the legends whom she was too shy to get to know back in her competitive days.

“When I first got on Tour, JoAnne Gunderson Carner was one of my heroes. Her and Pat Bradley. I was so nervous around them. I just kept my head down and tried to stay out of the way. I even started using my maiden name (Burba) for tournaments so I would not have to be right next to Gunderson in the locker room. But then she got married and we were right next to each other again.”

In her golf bag this week will be a card from her students at the First Tee of Tulsa wishing her well. Gibson said she has also been “blown away by all the messages I’ve received from friends and people I haven’t heard from in a long time wishing me luck. It’s pretty special.”

This is the third year for the U.S. Women’s Senior Open and the first year that Sorenstam will compete. Brooklawn, a 1985 A.W. Tillinghast design, will present a tremendous challenge.

During her career, Gibson would get so nervous before events that she would become light-headed and nearly always bogey the first hole. Hopefully she’ll realize after teaching and introducing the game for decades to tens of thousands of young golfers that she has accomplished as much or more in the game than any of her illustrious competitors.