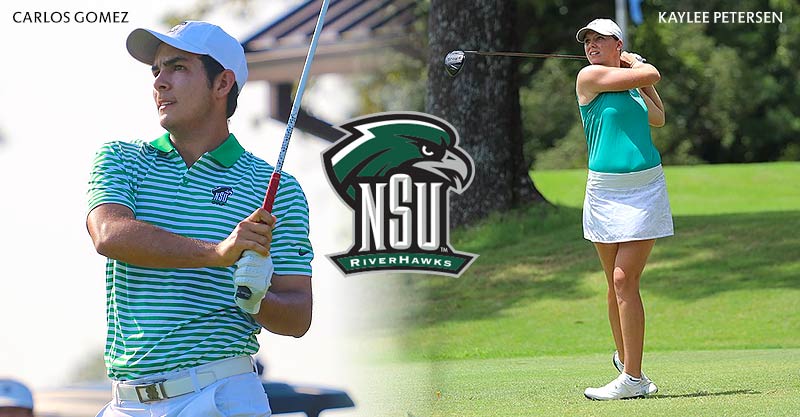 WINGATE, N.C. — Northeastern State men’s golf moved up one place on the leaderboard to finish sixth at the Hargett Memorial Invitational Tuesday.

Northeastern State finished with the fourth-most pars (154) and led all teams with five eagles.

In a tightly contested tournament, NSU was just eight strokes off champion Erskine College that finished with an 887.

Next, NSU will travel to Topeka, Kansas, for the Washburn Invitational March 22-23.

WINGATE, N.C. – Northeastern State ended a soggy day where it started, in third place at the Hargett Memorial Invitational. The RiverHawks shot six strokes better in the second round, with a pair of RiverHawks placing in the top-10.

Battling a wet course and a storm delay, NSU turned in the second-lowest team score Tuesday with a 311.  The RiverHawks turned in a two-day total of 628 and nearly caught second place on the leaderboard.  Wingate edged out the RiverHawks for runner-up, with No. 4- rankedLimestone taking top honors with a 603 score.

Nina Lee and Kelly Swanson had matching final score sheets with a 162 (84-78).  The pair finished tied for 20th overall.

The RiverHawks have finished in the top-three in their last three events and will be idle for a week before traveling to St. Joseph, Mo., for the Holiday Inn Express Women’s Spring Regional Preview on March 29-30.