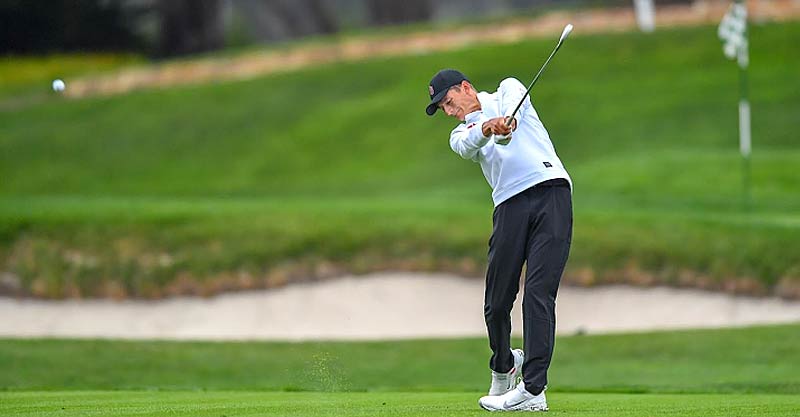 AUSTIN, Texas – Four of Oklahoma’s men’s golfers grabbed top-20 finishes to help guide the Sooners to a runner-up finish at the George Hannon Collegiate on Tuesday after 54 holes. OU tied Texas Tech for second, with Oklahoma State in fourth.

The Sooners (-9, 843) entered the day atop the leaderboard, leading No. 9 Texas by two shots at the Longhorns’ par-71, 7,372-yard UT Golf Club. Head coach Ryan Hybl‘s team opened the day with five pars, but Texas sunk 10 birdies on the front nine to take a lead that the Sooners couldn’t erase down the stretch.

“Just a tough day for us overall,” Hybl said after the round. “We just couldn’t really get anything going all day and so we’ll move on, regroup and get ready for our tournament in Arizona later this week.”

Despite tying for second with No. 19 Texas Tech, Oklahoma was the only team with four golfers inside the top 20, including two in the top 10.

McAllister (-7, 2nd) shot a 2-over 73 on Tuesday after carding 65 and 68 on Monday to finish alone in second place. The runner-up finish marked the third top-five placement of the junior’s career, with the other two resulting in victories. The George Hannon was McAllister’s 10th appearance for the Sooners and the Oklahoma City product has ended up inside the top 20 six times across those 10 tournaments.

Brightwell (-1, T9) continued his ascension up the collegiate ranks with another strong outing in Austin. His T9 placement is the 21st top-20 finish of his career, which started at UNC Greensboro. The redshirt senior was the only Sooner under-par on Tuesday afternoon, firing a 70 to move up five spots on the leaderboard and secure the second-place tie for Oklahoma.

Garett Reband (E, T14) used a 2-over 73 on Tuesday to earn the third-straight top-20 finish of the spring season. The All-American has been a steadying force for the Sooner lineup in his return to the lineup after missing a majority of the fall slate. He has ammassed 22 top-20 finishes and has finished inside the top 15 at his last nine events, marking the most successful stretch of his career.

Quade Cummins was the final Sooner in the lineup that finished inside the top 20. The Weatherford, Okla., product’s 4-over 75 secured him a share of 18th and his 25th top 20 in 40 tournaments for the Crimson and Cream.

Playing as an individual, Thomas Johnson was tied at the top among all unattached golfers in Austin. His 72  on Tuesday, paired with Monday’s scores of 68 and 72 gave him a share of ninth. Ben Lorenz also played unattached in his second collegiate appearance, finishing T31 after opening the tournament with a 69 (-2).

Patrick Welch wrapped up the Sooners’ week in Austin with a T50 finish, but his 1-over 72 score on Tuesday marked his best of the tournament.

The Sooners now travel to Tucson, Ariz., for the N.I.T. at Omni Tucson National which will tee off on Saturday, March 20.

Oklahoma State’s men’s golf team carded its second consecutive 284 on Tuesday  to finish in fourth place at the University of Texas Golf Club.

The Cowboys finished the 54-hole event with an 847 total, putting them four shots behind Oklahoma and Texas Tech for the No. 2 spot.The Longhorns also produced the individual medalist in Pierceson Coody, who carded a closing 68 to finish at 11-under 202 and four shots clear of the field.

A pair of Cowboys finished among the top 10 with sophomores Eugenio Chacarra and Aman Gupta sharing sixth place. Chacarra closed with a 72 to get to his 209 total, while Gupta posted the squad’s low round of the day, a 2-under 69, to get to his tally.

Freshman Jonas Baumgartner tied for 20th place after posting a 76 to finish at 216.

Classmate Bo Jin signed for his low round of the event, an even-par 71, to come in with a 217 total and tied for 24th place.

Junior Austin Eckroat rounded out the starting five with a 72 to finish at 219 and tied for 31st place.

Sophomore Rasmus Neergaard-Petersen, who competed individually, posted an 80 to finish at 224 and tied for 54th place.