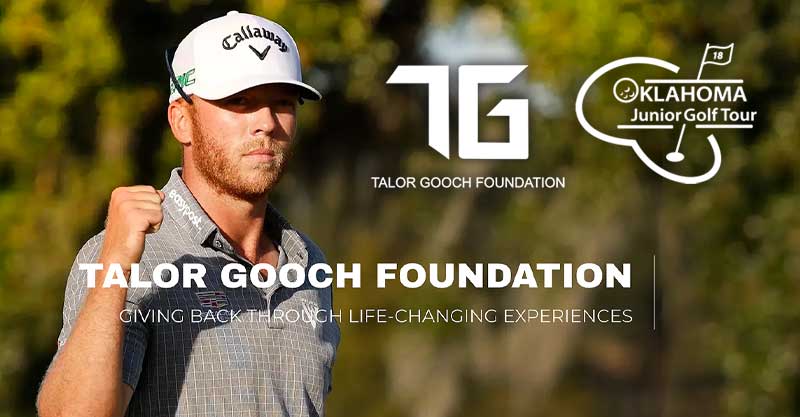 The Talor Gooch Foundation has donated $10,000 to the Oklahoma Junior Golf Tour to be used to improve the playing experience for contestants in its seven-event fall series followed by the Red River Classic against players from the North Texas Junior Golf Tour.

Gooch, a Midwest City native and professional golfer currently playing on the LIV Golf Series, played on the OJGT Tour growing up and has credited OJGT Tournament Director Morri Rose for helping he and many other outstanding young golfers hone their games in a very competitive environment without the expense and travel time of other national events such as the AJGA.

“We’re extremely grateful to Talor, his heart is in the right place,” said OGA Executive Director Mark Felder, who said the events this fall would be renamed The Fall Series Hosted by Talor Gooch. Most of the seven events are already booked out with a waiting list of players wishing to compete.

Felder said the money would be used by Rose at his discretion to improve the tournaments. Kelsey Kline, a longtime friend and mentor to Gooch, is now serving as the foundation’s executive director. He dropped by the OGA offices today to confirm the donation and said he expected the $1,000 per tournament would help with more food and drink for the contestants and the money for the Red River Classic would buy uniforms including hats and shirts for the Oklahoma side.

Gooch has been working toward forming the foundation for several years. He held a pro-am at Tulsa Country Club on Monday after the PGA Championship and among the participants were Max Homa, Matthew Wolff, Sam Burns, Harry Higgs, Kevin Streelman, Rhein Gibson, Brandon Weeden, Cameron Tringale, Robert Streb, Colt Knost and Mark Hubbard. Other pros who had committed but missed the cut on Friday flew out of town. The tournament raised over $300,000 to kickstart the foundation.

In addition to the donation to the OJGT, Kline said the foundation would also be making donations to two other organizations as part of its first round of outlays. They are Positive Tomorrows, an Oklahoma City elementary school for children of families facing homelessness, and Hope Is Alive, an Oklahoma City-based program that provides structure and housing for those dealing with drug and alcohol dependency.

“These are all programs that are near and dear to the hearts of Talor and his wife Ally,” Cline said. “They are a mother and a father now and want to help kids and families that are less fortunate.”