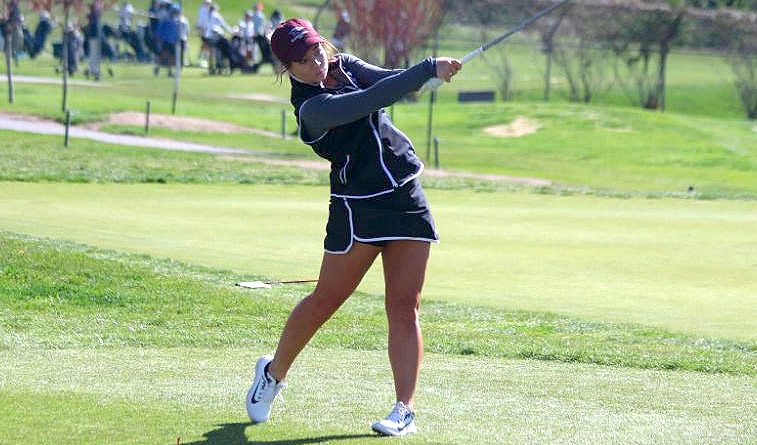 Photo: OC’s Kate Goodwin hits a tee shot during the West Super Regional. She posted a 75 on Tuesday and is 11th after two rounds.
URANGO, Colo. (May 8, 2018) – Oklahoma Christian’s Kate Goodwin made a significant move up on Tuesday during the second round of the NCAA Division II West Super Regional, putting herself in position to achieve her ultimate goal in the tournament.

Goodwin posted a 3-over-par 75 – one of the day’s top 10 scores at Hillcrest Golf Club – and as a result jumped eight spots on the leaderboard to 11th place in the 66-woman field.

The top three teams in the three-round Super Regional, and the top three players not on one of those teams, will advance to the NCAA Division II Championship in Houston later this month. With a two-round score of 9-over 153, Goodwin will enter Wednesday’s final round just one shot out of the third individual spot.

The junior from Tulsa – playing in the Super Regional for a third straight year – started her round on No. 10 and didn’t panic after a run of three straight bogeys on No. 15, No. 16 and No. 17. She parred the next four holes before back-to-back birdies at the par-5 No. 4 and the par-3 No. 5. She bogeyed the next two holes before a par at No. 9.

She is only six shots behind the individual leader, Jocelyn Chee Yi Min of California Baptist.

In the team race, Dallas Baptist (Texas) led with a two-day team score of 597, followed by Cal Baptist at 609 and West Texas A&M at 611. Those three squads have distanced themselves from the rest of the 12-team field.

Goodwin will begin her final round at 11:20 a.m. Oklahoma time on Wednesday and will be grouped with two other golfers playing the tournament as individuals, Jess Whitting of Rogers State and Courtney Ewing of Colorado State-Pueblo.