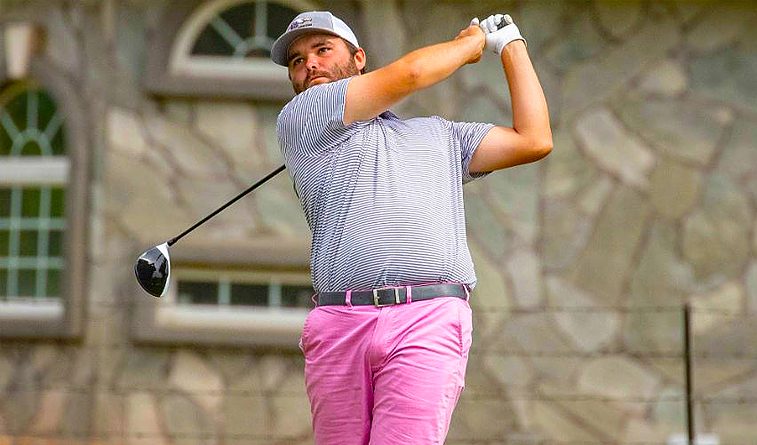 Photo: Garrett White hits a tee shot Tuesday during the second round of the South Central-West Super Regional. He shot an even-par 71.

The junior from Jacksonville, Texas, seized the individual lead with two quick birdies to start his round at La Paloma Golf Course and never relinquished it while shooting an even-par 71. Brown and Kyle McLay of Holy Names (Calif.) both are at 4-under 138 heading into Wednesday’s final round.

In the team race, the Eagles – who had led for a long time during Monday’s first round – slipped a bit Tuesday, posting a team score of 8-over 292 to put them at 582, in eighth place in the 20-team field. The top five teams, plus the top five finishers not on one of those teams, will advance to the Division II Championship later this month in Muscle Shoals, Ala.

Brown started his round on No. 10 on the 6,805-yard course and birdied that hole and the next – each a par-4 – to move into the lead at 6-under. He eventually finished with four birdies and four bogeys, the last of those on his final hole, No. 9.

Also shooting a 71 Tuesday was Heartland Conference individual champion Garrett White. The OC junior was 4-over after nine holes but sizzled on the front nine with four birdies to make it back to even par by round’s end. White was tied for 17th in the 108-man field.

OC junior Juan Pallach posted a 73, a five-shot improvement over his first round, while junior Grady Neal and freshman Andres Brictson each shot a 77.

The Eagles will be grouped with Colorado Mines and Colorado-Colorado Springs in the final round and will tee off from No. 10 starting at noon.