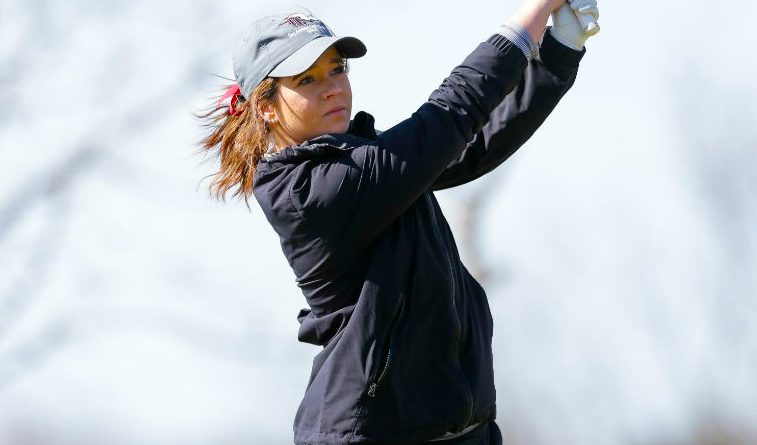 OWASSO, Okla. (March 19, 2018) – On a blustery, chilly day at Bailey Ranch Golf Club, Oklahoma Christian played one of its best rounds of the season on Monday in the Hillcat Classic.

Led by Kate Goodwin‘s even-par 72 that topped the leaderboard, the Lady Eagles posted a team score of 308 and took a 13-shot lead over tournament host Rogers State – the first time during the 2017-18 campaign that OC has led after the opening round of a tournament.

Newman (Kan.) was third in the seven-team field at 324 and joined Rogers State as the only squads within striking distance of OC.

Goodwin, a junior playing just a few miles north of her hometown of Tulsa, will take a two-shot lead over Jess Whitting of Rogers State and a five-shot advantage over third-place Imkeleen Meyer of Newman into Tuesday’s final round on the 5,890-yard course. Goodwin will be seeking the third individual win of her college career.

Temperatures were in the 50s, skies were cloudy and winds blew between 15-30 mph during the round, but that didn’t keep the Lady Eagles from populating the top of the leaderboard. In addition to Goodwin, sophomore Abigail Rigsby – coming off her first collegiate win last week in the Midwestern State Invitational – shot a 78 and was tied for fourth in the 41-woman field.

Tied for sixth were three OC players – starters Elizabeth Freeman (a junior) and Shaley Goad (a freshman) and freshman Felicity Wittenberg, competing in the tournament as an individual. Each of them shot a 79.

OC’s fifth starter, sophomore Ashton Nemecek, was tied for 20th after posting an 85. OC senior Chaise Lucero, also playing the tournament as an individual, shot a 93 and was in 35th place.

Tuesday’s round will begin at 9 a.m.

Rogers State and freshman Jess Whitting both rank in second place after the first round.  The Hillcats shot a team score of 321 for second in a field of seven teams with Whitting carding a score of 2-over-par 74 for second with 41 golfers competing.

Whitting posted a first-round score of 2-over-par 74 on the 5,890-yard, par 72 course. She was the best in the field on the par 3s and par 5s. The Perth, Australia native paced the field at 1-under-par on the par 3s, and led the competition on par 5s at 1-under-par. On par 4s, she finished at 4-over-par for the 2-over-par score. In her first round today, Whitting registered two birdies to rank third in the tournament.

Also ranking in the top 10 in the field is senior Mica Eastin after tallying a 7-over-par 79 in today’s opening round. Eastin went 1-over-par on par 3s and matched that same 1-over-par score on par 5s to go with her 5-over-par scoring on the par 4s. She finished with one birdie and nine pars in the first round.

Sophomore Sydney Murray totaled a first round of 15-over-par 87. She was 1-over-par on the par 5s in today’s round.

Competing as an individual, Jessica Green put together a first round of 8-over-par 80. Alex Massie shot 13-over-par 85, and McKenzie Risenhoover finished with a score of 90 in the first round.