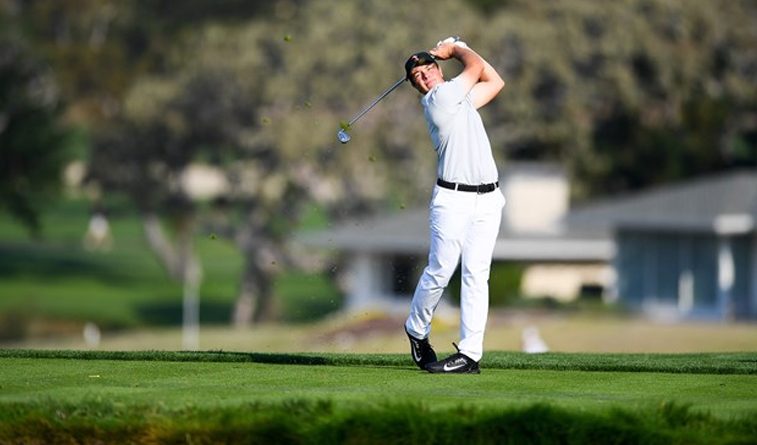 The top-ranked Cowboys entered the day with a four-shot lead before using their second-round tally to charge out to a 12-shot advantage at the par-71, 7,144-yard layout. Through 36 holes, the Cowboys stand at 17-under 551, while Baylor is second at 563. Florida State and Texas A&M came in tied for third place at 564.

OSU’s Viktor Hovland used a 65 during his second round to move from a tie for second place into sole possession of the lead at 10-under 132. The sophomore will take a two-shot lead into tomorrow’s final round.

Hovland started his round with six consecutive pars before posting an eagle at the par-5 seventh. After making the turn in 1-under 34, Hovland moved to 3-under par for his round with birdies at the 10th and 11th. His lone bogey on the back nine came at the 12th, but Hovland bounced back with a birdie at the 13th and added three more on Nos. 15-17 to come in with a 5-under 31 side.

Freshman Matthew Wolff climbed four spots into a tie for sixth place at 4-under 138 after following an opening 70 with a 68.

Junior Zach Bauchou maintained a spot in the top 10 after posting a 1-under 70 to stand at 139, tying him for eighth place.

Senior Kristoffer Ventura signed for a 73, giving him a 144 total and tying him for 31st place.

Freshman Austin Eckroat rebounded from an opening 77 with a 71 to rise nine spots into a tie for 59th place at 148.

Two Cowboys are competing in the tournament individually. Junior Nick Heinen fired a 66 to climb 47 spots into a tie for 31st place at 144, while junior Hayden Wood’s 76 tied him for 67th place at 151.

OSU will begin its final round tomorrow at 8:30 a.m. (EST) and will be grouped with Baylor and Florida State.