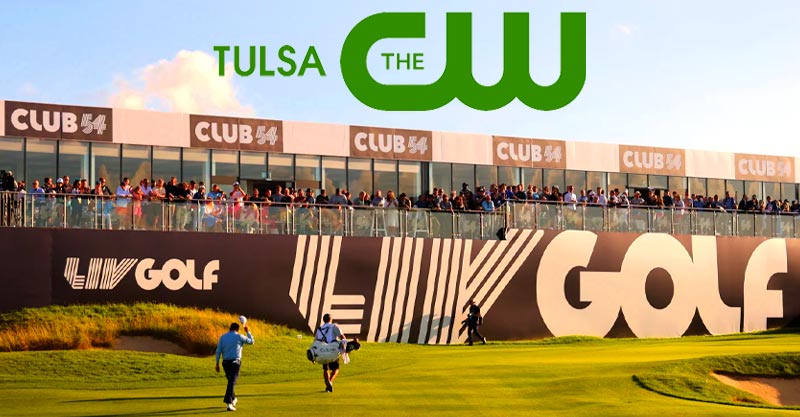 When LIV Golf announced it had agreed with the CW Network to broadcast its 14 events in 2023, it was very good news for those involved with the LIV Tulsa event May 12-14 at Cedar Ridge Country Club, although the news didn’t come without controversy.

KOTV (News 6), the local CBS affiliate and the Tulsa television station with the highest ratings, has an agreement to provide news programming on a daily basis for CW. The agreement is between Griffin Communications, which owns KOTV, and Nexstar Media Group, which owns the CW Network, to be an affiliate for both networks.

As such, there is an hour of local programming each morning at 8 a.m. on CW and an hour each evening at 9 p.m. provided by Griffin (KOTV) personnel. Only the evening show has a regular sports segment, so if sports director John Holcomb is in studio that night, he does his sports segment late in the hour on the CW and then again at 10:20 or so on KOTV from the same studio.

What this means in terms of the LIV tournament is likely a lot of expanded coverage since one of his networks will be the host of the event, just as CBS was the host network of the PGA Championship last summer at Southern Hills Country Club. KOTV broadcast specials all week live from Southern Hills.

“I think as we normally do, we’ll throw a lot of resources into the coverage,” Holcomb said. “We like to do the big events as well as we can and the fact that it’s on CW will enhance our ability to promote our coverage.

“Whatever momentum or positive coverage people remember from what we did last year at the PGA Championship, this will be the same. It’s another big event coming to Tulsa.”

The agreement between LIV and Nexstar calls for the Friday rounds of the three-day tournaments to be covered via steaming on a CW app that is expected to be free to the public. The Saturday and Sunday rounds will be covered live on the network, which has prominent stations on both Cox Cable and Uverse. On Uverse, KOTV and CW are side by side on channels 6 and 7.  The previous live broadcasts on YouTube will no longer be available.