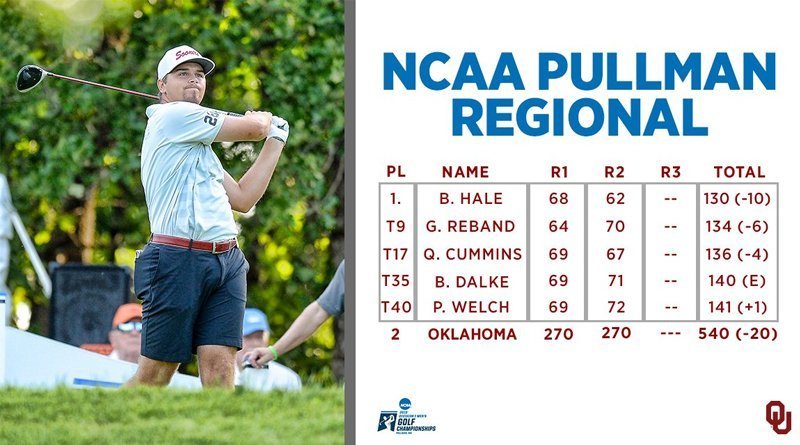 Senior Blaine Hale carded a school record 8-under 62 as the Sooners moved into second place at the NCAA Pullman Regional at the par-70, 7,232-yard Palouse Ridge Golf Club on Tuesday.

OU fired a 10-under 270 for the second straight day, matching its lowest round in program history in a postseason event. The Sooners seized momentum on the back nine, recording 13 birdies and playing the final nine holes at 7-under par.

Heading into the final round, the Sooners are in second place at 20-under 540. Texas A&M leads the 14-team field at 537. Georgia Tech is in third place with a 36-hole total of 541, followed by BYU in fourth at 543. Colorado State holds sole possession of fifth place at 548 with 18 holes to go.

Hale was impressive all day, playing bogey-free while carding eight birdies during his round. The senior’s round of 62 also matched the course record at Palouse Ridge. Through 36 holes, Hale leads the field at 130 (-10) and has a two-shot advantage heading into Wednesday’s final round.

“Blaine was phenomenal today,” OU head coach Ryan Hybl said. “Tomorrow is a big day for us and we need everyone clicking.”

Hale’s 36-hole total is the second-lowest by a Sooner in program history at a NCAA Championship event, one stroke shy of the OU record held by teammate Brad Dalke (129, 2017 NCAA Stanford Regional).
Junior Garett Reband is currently in the top 10, holding a piece of ninth place at 134. Reband finished at even-par 70 during Tuesday’s round and picked up six birdies.

Redshirt junior Quade Cummins is tied for 17th individually with a 36-hole 136. Cummins logged a 67  in the second round, picking up five birdies to move inside the top 20 on the leaderboard.

Dalke shares 35th place through two rounds at even-par 140, finishing with a 73 during Tuesday’s action. Freshman Patrick Welch carded a 72 and is tied for 40th place at 142 with one round remaining.

Wednesday’s final round will begin at 9:30 a.m. CT on hole No. 1 for the Sooners. OU will be paired again with Texas A&M and Georgia Tech.

Live scoring is available on GolfStat.com<http://results.golfstat.com/public/leaderboards/gsnav.cfm?pg=team&tid=18127