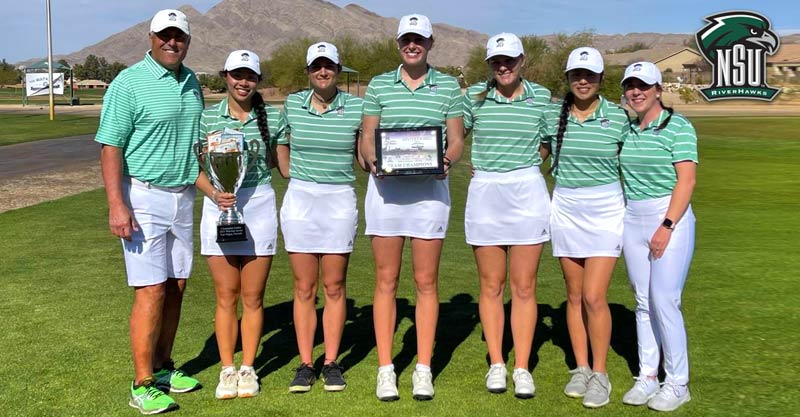 Northeastern State fired off a tournament-low round of 305 Tuesday and bested Colorado Christian by 15 shots.

Hang took medalist honors in just her second event for the RiverHawks, besting Missouri Western’s Allycia Gan by a stroke after rounds of  77-76.

The tournament win marked the sixth straight season that the RiverHawks came home with a team crown. It was the first time since 2017 that NSU won the team and individual medalist races in the same event.

Kaylee Petersen and Nina Lee tied for third at 155.   Aitana Hernandez rebounded back from an 87 Monday with the tournament’s lowest round of 74 and was tied for ninth place. Kelly Swanson took a top-15 finish on a 166 (85-81).

Wilma Merenmies tied for sixth to lead Oklahoma Christian to a fourth-place finish.Merenmies, a freshman from Jyvaskala, Finland, posted a final-round 7-over-par 79 on the 5,946-yard course, allowing her to move up four spots on the leaderboard with a final score of 159, six shots behind Hang.

As a team, OC finished fourth in the eight-team field. The Eagles’ team score of 335 on Tuesday put them at 660 for the two-round tournament, 38 shots behind Northeastern State. Colorado Christian (637) and Missouri Western (647) finished second and third, respectively.

OC freshman Camilla Jarvela, competing in her first collegiate tournament, finished 11th in the 46-woman field at 162 after shooting an 80 on Tuesday. Juniors Felicity Wittenberg of West Pymble, Australia, and Shaley Goad of Wheeler, Texas, tied for 20th at 170, closing with rounds of 87 and 89, respectively. Freshman Alyssa Wilson of Yukon, Okla., was another shot back at 171, tied for 23rd after a final-round 89.

The Eagles will play next Monday and Tuesday in the Midwestern State Invitational at Wichita Falls Country Club in Wichita Falls, Texas.