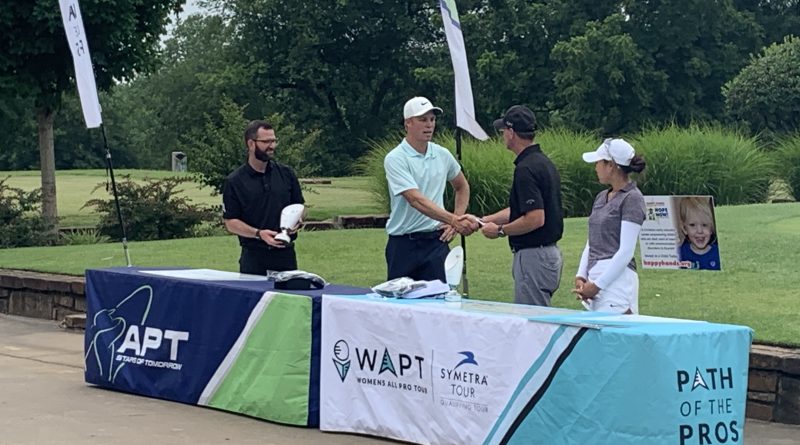 Above, Nick Hardy is congratulated by tournament officials

Nick Hardy closed with a 3-under-par 68 to keep Trent Whitekiller at bay and win the Supreme Lending Classic on the All Pro Tour at The Club at Indian Springs Saturday.

Hardy, the 2018 Big Ten champion while playing for Illinois, finished at 23-under for the four rounds, including his course record 62 in the second round Thursday.

Whitekiller, the former Oklahoma State star from Sallisaw, also shot 69 Saturday and finished second at 20-under. He won $10,000 for second, while Hardy took home the top prize of $20,000.

Zach Bauchou, who recently completed his senior season at OSU, shot a 4-under 68 in the final round to move up to a tie for seventh at 15 under. Logan McCracken of Oklahoma City also closed with a 68 and tied for 10th at 14 under, one shot ahead of former OSU golfer Sam Stevens and Blake Trimble of Edmond, who tied for 13th. Brendon Jelley of Tulsa tied for 35th at 6 under and Cody Burrows of Chickasha tied for 40th at 4 under.