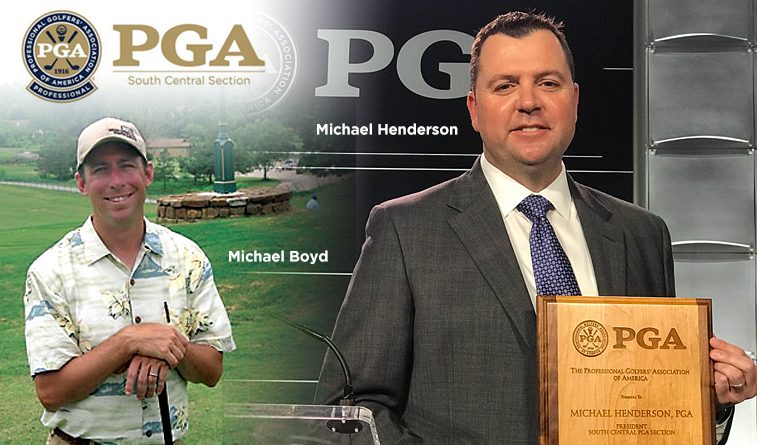 Broken Arrow – Michael Henderson, Principal of Henderson Golf Management, has been awarded the PGA’s highest honor as the 2017 South Central PGA Golf Professional of the Year.

Henderson, a 16-year PGA Member, owns The Golf Club of Edmond and has operated Lakeside Memorial Golf Course in Stillwater since 2010. Prior to 2010, Henderson held positions at Stevens Park Golf Course and Dallas National Golf Club in Dallas, Texas.

From 2010-2012, Henderson served as the South Central PGA Special Awards Committee Chairman before being elected as Section Secretary in 2012. He served as Vice President in 2014 and currently leads the Section Board of Directors as President. In addition to his commitment to the South Central PGA, Henderson also serves on the Oklahoma Golf Hall of Fame Board of Directors.

In addition, Michael Boyd was named Section Player of the Year for the fourth consecutive year. Boyd, who recently announced he is leaving the golf business to for a job in the insurance business, won the Section Championship and placed fifth in the Section Professional National Championship. Boyd, a former University of Tulsa All-American who worked his way on to the PGA Tour for a season, ran his own golf school based at The Club at Indian Springs in Broken Arrow.

During Henderson’s time as a South Central PGA Officer, the Section has seen the implementation of a player development grant program that has given out over $100,000 to PGA members and apprentices to help them grow the game of golf locally within their community.

He has also been deeply involved in both PGA HOPE and PGA Junior League, two of The PGA of America’s premier growth of the game initiatives. In addition to his other player development programs, Henderson also annually hosts the Oklahoma Special Olympics Summer Games, which is the largest gathering of special needs golfers in Oklahoma.

Following is a list of all section award winners for 2017. The award winners will be recognized at the South Central PGA Section Annual Special Awards Banquet Feb. 25  in Tulsa.

Private Merchandiser of the Year
Matt Fraser, The Alotion Club