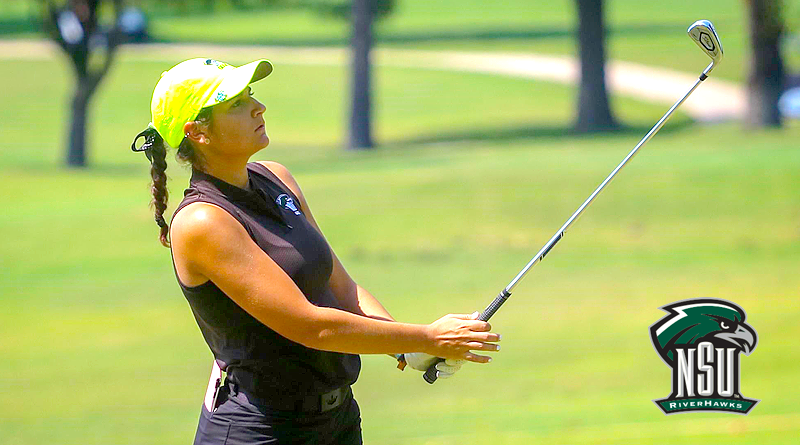 TAHLEQUAH, Okla. (Sept. 9, 2019) NSU’s Aitana Hernandez is the leader after the first day of the NSU Classic at Cherokee Springs Golf Course, shooting even-par 72 on the day. She will bring a one-stroke lead into the final day of play. NSU is sitting in fifth place as a team, shooting 312.

Day two of the tournament will begin at 8 a.m. Tuesday at Cherokee Springs.

Rogers State shot  307 to sit in second place. Mariana Flores led the way for the Hillcats, who finished round one three shots behind leaders Henderson State. The senior had three birdies on the back nine to climb back up the leaderboard and end the day tied for fourth with a score of 75, three behind Hernandez.

One shot behind Flores is sophomore Marybeth Bellnap with a 76.Jessica Green and Raquel Flores rounded out the scoring for the Hillcats, as the duo each shot 78.

Felicity Wittenberg posted the second-best round of her collegiate career and fellow junior Shaley Goad joined her in the top five for Oklahoma Christian.

Wittenberg, from West Pymble, Australia, overcame a triple bogey on No. 1 to shoot a 2-over-par 74 on the 5,964-yard course. She was 5-over after 11 holes but recorded three of her four birdies over her final seven holes.

One shot behind Wittenberg, tied for fourth, was Goad. The Wheeler, Texas, product matched Wittenberg for the tournament lead with four birdies and was one shot out of the lead before a double bogey at No. 18.

The other returnee in OC’s lineup this week, sophomore Alexandria Bennett of Plano, Texas, was tied for 18th after shooting a 78. Freshman Wilma Merenmies shot an 81 and was tied for 33rd while junior Elin Eriksson posted an 83 and was tied for 45th.