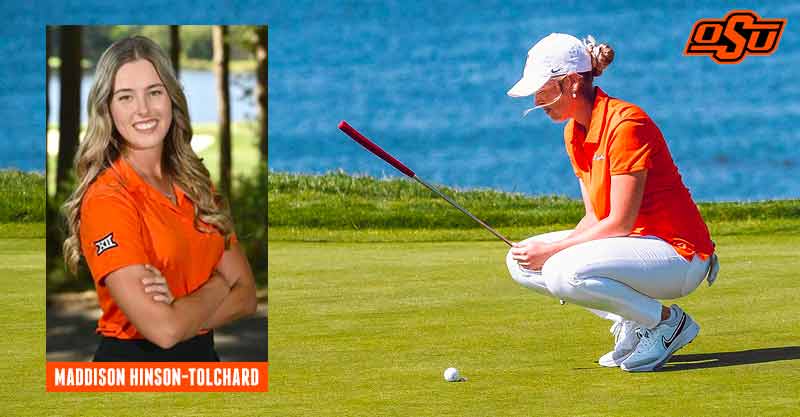 MEDINAH, Ill. —- Maddison Hinson-Tolchard carded a 65 in the second round of the Illini Women’s Invitational on Monday as Oklahoma State women’s golf landed in 11th place after 36 holes of play at Medinah Country Club. She finished the day at 9-under and will head to the final round just two strokes back from the individual lead while tied for fourth.

Hinson-Tolchard’s performance on Monday etched her name in the Cowgirl record books once again. Her 65 was not only the best 18-hole score of her career, but also tied for the third-lowest round in program history, just a single stroke back of the all-time mark.

In addition, her 36-hole score of 135 tied for the ninth lowest by any Cowgirl. Remarkably, Hinson-Tolchard edged out this mark in January at the Rapsodo Match in the Desert last season, where she posted a 134 en route to her first career tournament victory.

Hinson-Tolchard finished Monday with another clean scorecard, sinking 11 birdies on the day and surrendering just a pair of bogeys.

Rina Tatematsu ended the day in a tie for 35th at 1-under following rounds of 72 and 71. She has now shot par-or-better in four of her last five rounds played.

An eagle on hole No. 16 propelled Han-Hsuan Yu to an even-par outing on Monday, recording back-to-back rounds of 72 and ending the day tied for 40th.

Hailey Jones and Thitaporn Saithip rounded out the Cowgirl lineup, both finishing at 4-over and in a tie for 66th. Jones and Sathip both bounced back in the second round, carding rounds of 73 and 72, respectively.

The event marks Jones’ tenth consecutive start for the Cowgirls while Saithip returned to the lineup for the first time since the Carmel Cup in September.

Cecilie Leth-Nissen posted an opening round 69 before ending the day tied for 35th and 1-under. Leth-Nissen has been gaining valuable playing experience to open her freshman year, and her 69 on Monday was the lowest 18-hole score of her young career.

Meanwhile at the Dale McNamara Invitational in Broken Arrow, Angelica Pfefferkorn led the trio of Cowgirl individuals with consecutive rounds of 75 to land in a tie 25th. She utilized a clean day of play, carding 29 pars, which tied for most in the field.

All three Cowgirls will begin their third round at Cedar Ridge Country Club tomorrow at 8:30 a.m. CT.

Live stats for both events will be available at golfstat.com.