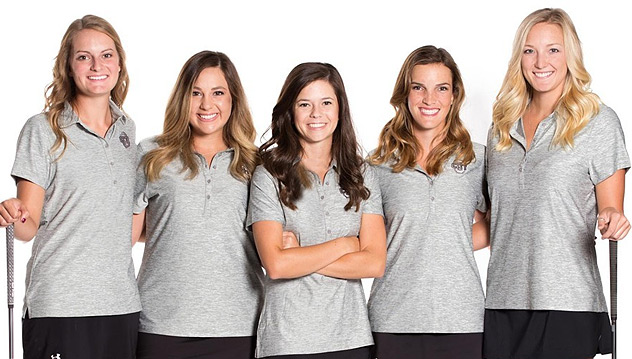 OCU starts the spring as the No. 2 team in the NAIA women’s golf rankings. The Stars have a challenging schedule to prepare themselves to vie for the program’s eighth national championship.

“I have no doubt that this team, from top to bottom is our strongest ever,” Stars head coach Marty McCauley said. “We have nine girls that all could play in the top five at any time. It will be imperative for us to work together as a group of nine and not get too far ahead of ourselves as the spring rolls along.”

The Stars are set to open the spring season Sunday in the Claud Jacobs Invitational at the Club at Colony Creek in Victoria, Texas. The Stars won the Claud Jacobs for the third time ever last season by 30 strokes. Caroline Goodin of the Stars is the defending champion, while Emma Allen finished as runner-up then.

Every team member is expected to play in the 36-hole tournament on the par-72, 5,856-yard course Sunday and Monday. No. 12 Texas Wesleyan will be the other ranked team in the seven-team field.

“I feel our schedule sets up nicely for us to be able to have success while being challenged,” McCauley said. “I expect us to play very focused and determined.  We have played very well there the past few years and should have great course knowledge.”

OCU won two tournaments in 2015-16 and seized the SAC championship for the fifth straight year. The Stars finished 16 strokes behind national champion Keiser (Fla.) in seventh place in the NAIA Championships at the Savannah Quarters Country Club in Pooler, Ga. The Stars were only six strokes back of second-place William Woods (Mo.).

“We were absolutely not satisfied with finishing seventh,” McCauley said. “I would never take for granted a top-10 finish at the national championship, but I am certain the girls from last season’s team were not satisfied with the final result.”

OCU finished fifth and sixth in the first two tournaments of the 2016 fall season and were able to cap the season off by winning the Susie Maxwell Berning Classic. The Stars set an OCU record by winning the classic by 32 strokes. Anna Mikish, a junior from Choctaw, Okla., shot a 71-71-75–217 to earn the individual crown.

“We had a very solid fall,” McCauley said. “What I liked the most were the improvements we made from the first round of the fall to the last, and I felt we matured a lot as a team. I am hopeful that the spring will go the same way. Our schedule really sets us up to do so.”

The Stars return a wealth of talent from last year’s squad. In total, six of OCU’s nine players have garnered all-American honors in their careers.

In addition to Goodin and Mikish, the Stars also return seniors Raegan Barnes, Kailey Campbell and Katie Lee-Wilson along with junior Emma Allen.

Campbell, out of Oktaha, is a three-time NAIA all-American. She took home second-team honors in 2013-14 and 2015-16 and was an honorable mention on the Stars’ 2014-15 squad. She had an average score of 77.78 and finished in the top 10 in four tournaments last season, including a third-place finish at the SAC Championships. Campbell averaged 76.00 shots per round in nine rounds in the fall and took home second place at the Missouri State/Payne Stewart Memorial.

Wilson, from Owasso, averaged an 81.26 in 10 tournaments last season. She is a two-time NAIA all-American, picking up third-team honors and second-team acclaim in her OCU career. She did not compete for OCU in the fall, but expects to return to the course for the spring semester.

Allen, of Broken Arrow, is another returning all-American for OCU, garnering first-team honors as a freshman. She finished in the top 10 in each of her final three tournaments last season and averaged a 78.11 in 10 tournaments. She finished third in the Berning Classic with a 75-70-79–224. It was the only event she competed in this fall.

“I feel that we have great leadership amongst our team,” McCauley said. “This senior class has accomplished so very many wonderful feats and will continue to do so throughout this semester and beyond their time at OCU.  Having all 5 girls come to OCU from day one out of high school, and the fact that all 5 are from Oklahoma, will make this spring a very fun experience.”

New to the Oklahoma City squad this season are freshmen Melissa Eldredge and Regan McQuaid along with junior transfer Savannah Moody.

Eldredge comes to OCU from Eufaula High School. She was the fifth-ranked player in Oklahoma her senior year of high school. She averaged 75.00 strokes per round in her junior season at Eufaula. In the fall, Eldredge played in all three tournaments for the Stars, turning in an average score of 79.89.

McQuaid, out of Tulsa, attended Jenks High School. She was named to the Oklahoma Coaches Association all-state team as a senior. McQuaid competed in one event this fall and carded an average score of 83.00.

Moody, from Aledo, Texas, comes to OCU by way of McLennan (Texas), where she was an NJCAA all-American. She also finished 17th individually and helped McLennan to a third-place finish at the NJCAA Championships. This fall, Moody had an average score of 77.00 in nine rounds.

“As a group, I couldn’t ask for a better set of individuals,” McCauley said. “They do absolutely everything I ask of them and excel athletically, academically and socially.”

“We have to focus on the process of one shot, one day, one tournament at a time,” McCauley said. “If we do that, I have no doubt that this group with be very competitive at the national championship.”