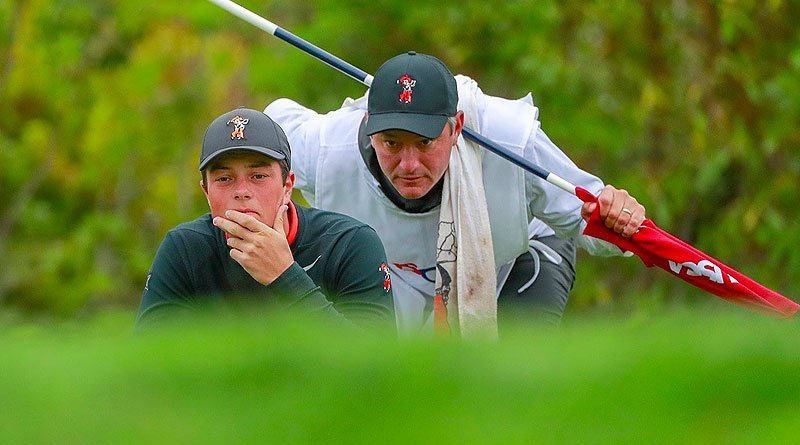 Oklahoma State golf coach Alan Bratton is hoping to improve on his record as a caddie at Augusta National and he’s got just the man to help him.

Viktor Hovland, who rolled to the U.S. Amateur Championship last summer at Pebble Beach with Bratton on the bag, will team up with his coach again for his first encounter with the hallowed grounds where The Masters will be contested April 11-14.

Bratton has caddied there for two previous OSU stars ­ – Peter Uihlein in 2010 and Jordan Niebrugge in 2013. Neither made the cut, which is understandable for first-time amateurs. Bratton did get to play Augusta National a few times in 2010, arranged by Uihlein’s father and former Titleist CEO Wally Uihlein.

Armed with his knowledge of having played, caddied and watched The Masters intently for many years, and carrying yardage books full of meticulous notes, Bratton can offer plenty of strategic advice. But as he did at Pebble Beach, his calming presence and encouragement are often worth more to Hovland.

“I just try to be able to say the right thing at the right time to help him play with confidence,” Bratton said.

“It’s nice to have someone that knows you well,” said Hovland. “He gets super excited, but he doesn’t really show it. He’s all business. He’s caddied there before and knows how things work behind the scenes. I take a lot of comfort from that. I’m with coach and I’m going to be okay is how I think about it.”

The U.S. Amateur victory comes with many benefits for the junior from Norway. He has played in three PGA Tour events and turned down others, saving up his exemptions for a possible run at PGA Tour status this summer. He said he is still debating between turning professional immediately after this college season, waiting until after the U.S. Open (he has an exemption into that from winning the Amateur) or returning to OSU for his senior season.

Beyond finishing his degree, Hovland will have little left to prove at the collegiate level. He was dominant in OSU’s run to the national championship in 2018 and is locked in a race with teammate Matthew Wolff for Player of the Year honors this year, having won three times and finished no worse than eighth in six stroke play events.

Despite being off in his ball striking at the Arnold Palmer Invitational at Bay Hill, he made the cut and finished tied for 40th.

“I definitely felt that I belonged,” Hovland said. “I wasn’t playing good at all, but I’m getting better at managing my game and missing in the right spots. I made a few key up-and-downs. It validated to me that even though I didn’t have my best game I was able to get something out of it. “

Hovland has struck up a friendship with former OSU star Charles Howell as well as Rickie Fowler and both will be supportive and likely play practice rounds with him at Augusta National. He is trying not to be awed or intimidated by the course or the moment.

“I’m trying to keep a relaxed attitude,” Hovland said. “If I just play good golf, that should be enough.”

One amateur will wind up chatting with Jim Nantz in Butler Cabin on Sunday. After the NCAA and U.S. Amateur runs, Hovland may as well go for the trifecta. His caddie is hoping the third time’s the charm as well.

“You always want to qualify, so to get through was good, and I’m excited for a season in Canada. You always want to do something to get yourself closer to the PGA Tour, college golf is a great step, playing a Tour where you can get status and skip stages of Q-School, that’s the biggest goal, so this is the best Tour I think,” Wood said.

With his finish, Wood will be fully exempt for the first six tournaments in 2019 and is subject to the re-shuffle. The event was one of six qualifying tournaments for the Tour.