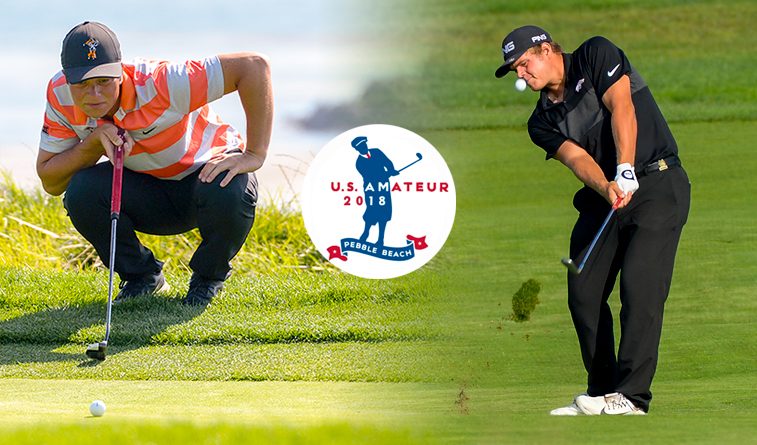 Cole Hammer, of Houston, Texas, the co-medalist and No. 2 seed who is seeking to win his second USGA championship of the year, survived two close matches on Thursday to advance to the quarterfinals of the 118th U.S. Amateur Championship at Pebble Beach Golf Links.

Meanwhile, Oklahoma State’s Viktor Hovland, with OSU coach Alan Bratton as his caddie,  advanced. Hovland, of Norway, the No. 5 player in the World Amateur Golf Ranking, is the highest-ranked player remaining, and he moved through with relative ease, earning a 2-and-1 victory over Harrison Ott in the morning and a 7-and-6 victory over fellow countryman Kristoffer Reitan.

Mason Overstreet of Kingfisher and the University of Arkansas won his second-round match over Jackson Van Paris 3 and 2, but was derailed in the round of 16 by Davis Riley of Hattiesburg, Miss., in 21 holes.

Van Paris, who turns 15 next week, is believed to be the youngest player to win a match in the U.S. Amateur since Bob Jones in 1916, a 1-up victory on Wednesday, before losing to Overstreet.

“I played the coolest golf course in the country, played the biggest amateur tournament in the world and got, I guess you’d call this 17th [place], since I didn’t make it to the Round of 16,” said Van Paris, of Pinehurst, N.C., who lives a five-minute drive from the Pinehurst Resort, the host site of next year’s 119th U.S. Amateur Championship.

Six of the eight matches in the Round of 16 went to the 18th hole or beyond, and three of those went to extra holes. Riley, of Hattiesburg, Miss., survived the longest battle, birdieing the 21st hole to eliminate Overstreet.

Alex Fitzpatrick, of England, is attempting to duplicate the feat of older brother Matthew, who captured the 2013 U.S. Amateur with Alex, then 14, as his caddie. Fitzpatrick, now 19, won a pair of extra-hole matches on Thursday, edging Jesus Montenegro, of Argentina, in 20 holes in the morning, then making a birdie on the 19th hole to move past McClure Meissner, of San Antonio, Texas, in the afternoon.

Devon Bling, 18, a rising sophomore at UCLA, defeated 2018 U.S. Open qualifier Shintaro Ban, 2 up, in the morning, then ousted 2017 U.S. Junior Amateur champion Noah Goodwin in 20 holes in the afternoon. Bling is competing in his first U.S. Amateur.

Isaiah Salinda, 21, of South San Francisco, Calif., a rising senior at Stanford University who is competing in his first U.S. Amateur, ousted Trevor Phillips, 4 and 3, in the morning, then edged 2016 U.S. Mid-Amateur champion Stewart Hagestad, 1 up, in the afternoon. Salinda never led until the end against Hagestad, when he birdied No. 18 after Hagestad’s 25-foot birdie try stopped on the edge of the hole.

►Viktor Hovland, of Norway, has defeated two teammates in three matches: fellow Oklahoma State player Hayden Wood in the Round of 64, and former high school teammate Kristoffer Reitan in the Round of 16.

*Quarterfinal round winners advance to the semifinal round of match play on Saturday, beginning at 8 a.m.