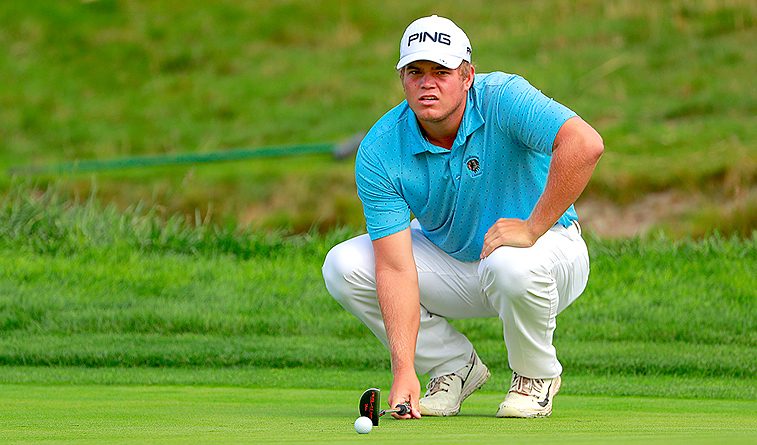 Cole Hammer, 18, of Houston, Texas, the No. 2 seed and one of the hottest amateur players in the world, holed out a pitch shot from behind the green for an eagle on the 18th hole at Pebble Beach Golf Links to clinch a 2-up victory over Alvaro Ortiz, of Mexico, on a dramatic first day of match play Wednesday in the 118th U.S. Amateur Championship.

Hammer, who won the Western Amateur 10 days ago and captured the U.S. Amateur Four-Ball with Garrett Barber in May, joined co-medalist Daniel Hillier, 20, of New Zealand, in overcoming deficits to advance to the Round of 32. Hillier trailed No. 64 seed Jacob Bergeron, of Slidell, La., by two holes early before rallying for a 3-and-2 win over Bergeron, who survived a 24-for-1 playoff on Wednesday morning to snag the final berth in the 64-player match-play bracket.

Jackson Van Paris, 14, became the youngest player to win a match since Bob Jones, the nine-time USGA champion who was about 6 months younger than Van Paris when he prevailed in a match in 1916. Van Paris, of Pinehurst, N.C., chipped in for birdie on No. 18 to edge Dylan Perry, of Australia, 1 up.

Two players with Oklahoma ties advanced into the round of 32. Mason Overstreet of Kingfisher and the University of Arkansas defeated Cameron Sis of El Cajon, Calif., 1 up. Viktor Hovland of Norway and his Oklahoma State teammate Hayden Wood faced off  with Cowboys’ coach Alan Bratton serving as Hovland’s caddie. Hovland won the match, 3 and 2, over Wood, 22, whose father Willie Wood, was an Oklahoma State golfer and the winner of the 1977 U.S. Junior Amateur.

Brad Dalke of Norman and the University of Oklahoma was edged 1 up by McClure Meissner of San Antonio, Texas.

Overstreet will face Jackson Van Paris of Pinehurst, N.C., in the second round Thursday morning. Third round matches will be held Thursday afternoon. Hovland goes up against Harrison Ott of Brookfield, Wis.

Fourteen of the 32 first-round matches reached the dramatic par-5 18th at Pebble Beach or beyond, with one match going 23 holes. Trey Winstead, of Baton Rouge, La., won holes 16-18 to force extra holes against Raul Pereda, of Mexico, but lost to a par on the par-3 fifth hole. It tied for the longest match in the U.S. Amateur since 1998, when J.J. Henry prevailed over Tom Johnson in 25 holes.

►The four U.S. Junior Amateur semifinalists all reached the Round of 64, but three of them were eliminated on Wednesday. Runner-up Akshay Bhatia, champion Michael Thorbjornsen and semifinalist Cameron Sisk all lost, while Cole Hammer, who fell to Bhatia in the semifinals at Baltusrol Golf Club in Springfield, N.J., was the lone winner.

►McClure Meissner defeated Brad Dalke, the 2016 U.S. Amateur runner-up, 1 up, in a seesaw match in which a hole was not halved until No. 15. Meissner won eight holes and Dalke seven. Meissner, of San Antonio, Texas, sealed his win when the players halved Nos. 17 and 18 with pars.

►Zheng Kai “Bobby” Bai of the People’s Republic of China aced the 112-yard No. 7 with a 56-degree wedge. “It was fun to have that hole-in-one on the most beautiful par-3 here,” said Bai. It is the second known ace on the hole during a USGA championship and the eighth of Bai’s career. Todd Fischer scored an ace there in the second round of the 2000 U.S. Open.

►Jacob Bergeron earned the final spot in match play in a 24-for-1 playoff that took approximately 90 minutes. Bergeron defeated Peter Kuest on the second playoff hole after they were the lone pair to birdie the par-3 17th, the first playoff hole. Bergeron prevailed with a bogey on the par-5 18th.

*Round of 32 winners advance to the third round of match play on Thursday, beginning at 2 p.m.