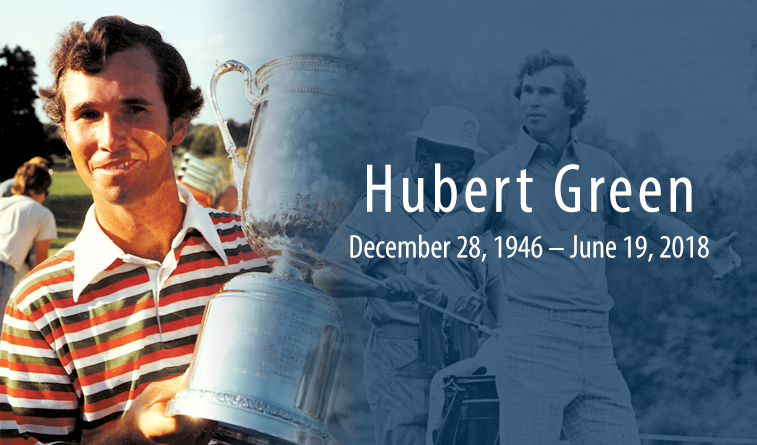 Green shakes off death threat to win at Southern Hills

Hubert Green was known for his unique low-hands, quick-tempo swing and steely determination on the golf course, a recipe that led to 19 PGA TOUR victories, four PGA TOUR Champions wins for the Alabaman and induction into the World Golf Hall of Fame in 2007.

But never was Green’s mental toughness more evident than during his two major championship victories, the 1977 U.S. Open and 1985 PGA Championship.

Green, who passed away last night at the age of 71 following a lengthy battle with throat cancer, was at the height of his career when he entered the ’77 Open at Southern Hills Country Club in Tulsa, Oklahoma. The winner of 11 tournaments over the previous six years, Green was clinging to a one-stroke lead after three rounds, but also saw another 10 players within three shots.

That he still led by one through 14 holes Sunday and would win by playing the final four holes in even par was one thing. It was quite another that Green, upon completing the 14th hole, was notified by tournament officials of a death threat they had received, saying Green would be shot when he reached the 15th green.

He was presented with three options: continue as is, wait for officials to clear the course of fans before continuing, or suspend play until Monday and finish without a gallery. Green chose to continue playing. Despite the pressure and uncertainly of the threat, not to mention the intense pressure of competing for his first major title, Green did what he needed to. With a birdie on No. 16 and bogey on No. 18, Green managed to win by one stroke over 1975 U.S. Open champion Lou Graham.

It was a much different circumstance at the 1985 PGA Championship, which proved to be Green’s final PGA TOUR victory. To say it came rather unexpectedly in the public eye was an understatement. He had won only twice during the previous six seasons, the last coming nearly a full year earlier, and he wasn’t playing particularly well in 1985. Despite this, Green was solid from the outset at Cherry Hills Country Club in Denver, and by Sunday’s final round, he had built a three-stroke lead over second-round leader Lee Trevino.

But the lead didn’t last long. When Trevino eagled the fifth hole, Green found himself trailing by one. As the day progressed, it became a two-man showdown and as late as the 14th hole, they were tied. But as Green played steady golf with pars the rest of the way, Trevino bogeyed Nos. 15 and 17, giving Green a two-stroke victory.

Green also was a member of three U.S. Ryder Cup teams and never lost a singles match. For all his successes, there certainly were disappointments along the way, but none greater than the 1978 Masters when he missed a three-foot birdie putt on the final hole to miss forcing a playoff with Gary Player. That in itself included some unforeseen drama on the final hole. Just as he was about to stroke his birdie putt, Green had to back away after hearing a radio announcer describing the scene. He then reset and missed the putt. But Green never blamed the announcer for what might have been. As he later said to Golf Digest, “Only an amateur would have been put off by the interruption — or would try to make excuses about it.”

Green’s mental strength proved valuable off the course, as well. It helped him overcome an extremely difficult battle with oral cancer in 2003. He went through radiation and chemotherapy that summer and lost more than 40 pounds. By the following year, however, he was back competing on PGA TOUR Champions.

Green was born in Birmingham, Alabama, learned to play at Birmingham Country Club where his parents were members, and starred at Florida State University. He turned professional in 1970 and qualified for the TOUR the following year, when he was named Rookie of the Year after capturing his first title at the Houston Champions International.

His best years in terms of victories were 1974 with four and 1976 with three, which came in consecutive starts. Green went on to win four times on PGA TOUR Champions from 1998 to 2002.