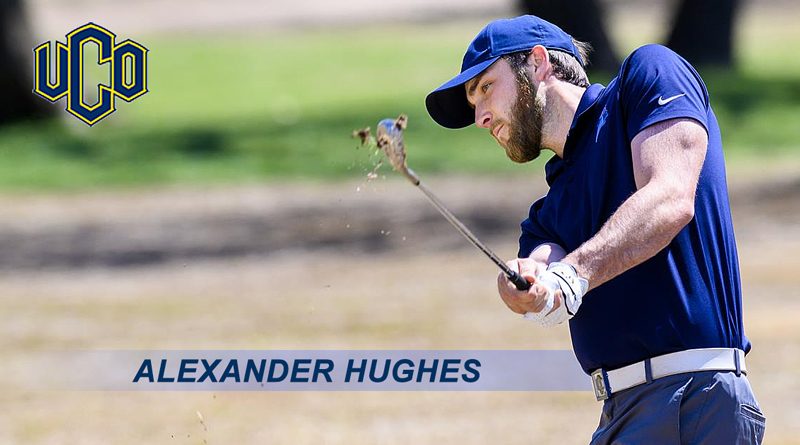 MIAMI, Fla. (June 8) – Alexander Hughes had back-to-back rounds of one-over-par 72 to spark Central Oklahoma to a third-place showing after first-day play in the Battle at the Shores Monday.

The Bronchos shot consecutive 290 scores at the 6,800-yard, par-71 Normandy Shores Golf Club for a 580 total.  Host and top-ranked Barry is atop the leaderboard of the 16-team tournament with a 10-under-par 558 total, two shots ahead of No. 2 Lynn.

Hughes’ consistency led the day for UCO and the senior is tied for ninth in the individual standings with a 144 total.  Joe Lemieux fired a two-under 69 in the morning round before coming back with a 77 and is tied for 15th at 146.

Jacob Lackey shot 74 in the morning before highlighting an afternoon 73 with a hole in one, while Cody Troutman shot 75-73 and Blake Murry 77-72.

Hughes opened the morning round on No. 4 and was two-under after eight holes before bogeying three of the next six holes.  He bounced back to par his last three holes for a 72.

Hughes bogeyed two of his first five holes in the afternoon, but rebounded to play the last 13 holes one-under in coming back with another 72.

The junior was one-over after five holes in the morning, then made that up with birdies on Nos. 11, 12, 15 and 16.  He got to four-under for the round with a birdie on the par-5 third hole, but double bogeyed his final hole – the par-4 fourth – in finishing off the two-under 69.

Lemieux got off to a slow start in the afternoon and never recovered in coming back with a 77.

Lackey had one birdie in his morning 74 and was three-over after four holes in the second round before holing out his tee shot on the 156-yard par-3 14th hole.  He parred eight of the last nine holes in finishing off the 73.

Troutman birdied his last hole for a 75 in the first round and then bogeyed two of the first three holes in the afternoon before reeling off 15 straight pars to come in with a 73.

Murray couldn’t get anything going in a morning 77 and was four-over through 10 holes in the second round before getting hot, going three-under on the last nine holes to rebound for a 72.