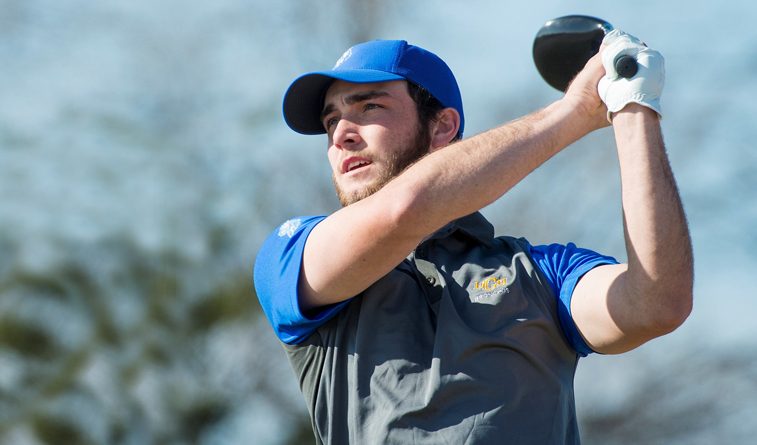 EDMOND (March 20) – Alexander Hughes finished off a runaway triumph in the individual race to lead Central Oklahoma to an easy team victory in the Broncho Invitational Presented by RCB Tuesday at Oak Tree Country Club.

A ninth-hole double bogey didn’t faze Hughes, who proceeded to shoot a two-under-par 33 on the back nine to polish off an even-par 70 that gave him a two-round total of 139, good for a four-shot win.

The Bronchos, who entered the day with a 13-shot lead over Arkansas Tech, cruised to an 11-stroke victory over Harding for their third tournament title of the 2017-18 season.  ATU finished third in the 15-team field at 612, Oklahoma Christian was fourth at 618 and UCO’s second-team unit tied for fifth with Midwestern State at 621.

Yannic Oppenheimer backed up Hughes’ even-par round with a 73, while Wesley Jackson shot 75, Blake Berry 79 and Eli Armstrong 80.

Holden Crago and Jacob Lackey both had 75s to top the second unit.  Tyler Avants added a 76, Stephen Lynch a 77 and Nick Pierce an 80.

Hughes had rounds of 69-70 in a tournament that had a scoring average of 79.67 for the 88-player field as strong winds buffeted the tough East Course throughout Monday’s opening round and most of Tuesday’s closing 18.

The Tulsa junior opened his final round with two pars, gave a stroke back on the par-4 third and then got that back with a birdie on the par-4 seventh.  He made the turn at two-over 37 after double bogeying the 467-yard par-4 ninth, which was the toughest hole of the tournament both days.

Hughes rebounded with six straight pars to maintain the lead and then put the tournament away with back-to-back birdies on the rugged par-4 16th and par-3 17th before finishing with a par.

“I just played really solid,” Hughes said.  “I knew with the conditions coming in and the weather coming up that I had to play as consistent as possible and trust my game.  I’ve played out here so many times I know about every spot on this course and that was an advantage for me.

“Yesterday was a grind and today I focused on not getting ahead of myself and taking it shot by shot.  This is my third win at UCO and I just felt pretty comfortable out there and I knew I could do it.”

Crago got off to a tough start and made the turn at seven-over 42 before reeling off four straight birdies to start the back nine.  He went on to finish with a closing 33 for the 75 that moved him into seventh place in the medalist race at 149.

The Bronchos travel to Muscle Shoals, Ala. next week for the Division II National Preview.

Southern Nazarene had two players finish inside the top five as Jacob Prentice took second and Rhett Bechtel tied for fourth at the Broncho Invitational.

Bechtel fired the lowest round of the tournament with a 3-under 67 Tuesday. That helped him shoot a 148 total over two rounds. Prentice though backed up his 72 in the first round with a 71 in the second as he fired a 143 total. He was four shots back of Hughes.

Playing as individuals, Sam Stevens of Oklahoma State took third at 145 while teammate Brendon Jelley tied for fourth at 148 with Bechtel and Luke Cornett of Arkansas State.

The Eagles’ top finisher was junior Juan Pallach, who shot a 6-over-par in the 7,102-yard course on Tuesday to close at 151, tied for 10th among the 88 players in the tournament. Junior Garrett White turned in OC’s best final-round score, a 3-over 73 that included four birdies, and he jumped into a tie for 12th at 152.

OC will wrap up a stretch of five tournaments in six weeks next Monday and Tuesday when the Eagles travel to Austin, Texas, to play in the St. Edward’s Invitational at Onion Creek Club.

CARMEL, Calif. (March 20) – Cold and rain ended up forcing the cancellation of the final round of the Otter Invitational here Tuesday, leaving Central Oklahoma with an eighth-place finish in the 20-team event.

Course conditions became unplayable at the 5,804-yard, par-71 Poppy Hills Golf Club during the day and the final round was finally cancelled since the teams didn’t start on the same hole, even though some teams had actually completed 18 holes.

Sydney Roberts ended up tied for 16th in the individual standings with her opening 75.  Anna Pool had a 77 for the Bronchos, while Marla Souvannasing shot 79, Yuna Sato 81 and Makena Mucciaccio 82.