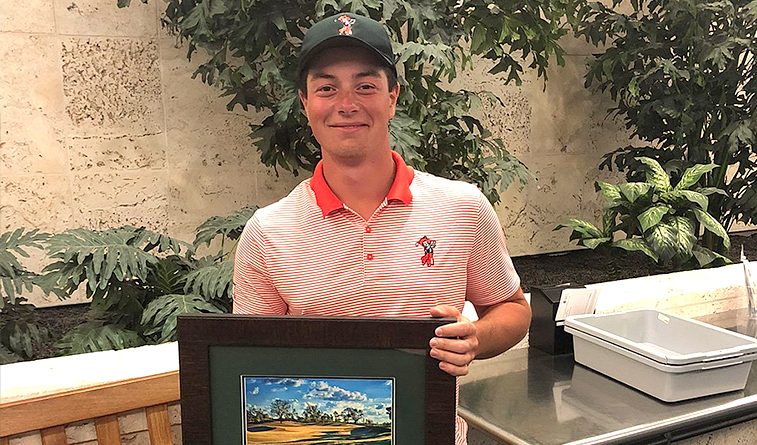 Photo: Congrats to Hovy on his first career victory.

The Cowboys’ streak is tied for the second-longest string in program history. OSU’s 1974-75 and 1975-76 squads each won six tournaments in a row as well. The school record of seven consecutive wins was set by the 1986-87 team. Overall, head coach Alan Bratton‘s squad has now won seven of its eight events on the year.

OSU entered its final round at the par-71, 7,144-yard layout with a 12-shot lead before carding a 5-over 289 during its final round to finish five shots clear of Florida State with a 12-under total of 840. The Seminoles posted a closing 281 to move into second place with their 845 score. Texas A&M finished at 850 and alone in third place.

The Cowboys produced the event’s individual medalist as well with Viktor Hovland earning his first career victory. The sophomore posted a closing 68 to finish at 13-under 200 and four shots clear of the field.

For Hovland, the finish continued an impressive run with top-five showings in each of his last five starts. During that stretch he has two runner-ups, a tie for third and a tie for fourth place to his credit.

Hovland opened his third round with four consecutive pars before stringing together three birdies in a row. After turning with a 2-under 33 front side, he posted five more pars to begin his inward nine. Hovland added birdies at Nos. 15 and 16 on his way to a 1-under 35 back nine.

Matthew Wolff signed for a closing 74 to tie for ninth place at 212. The freshman’s top 10 was his fifth in his last six starts.Junior Zach Bauchou closed with a 75 to tie for 18th place at 214, while freshman Austin Eckroat rose 16 spots into a tie for 43rd place at 220 after finishing with a round of 72.

Senior Kristoffer Ventura posted a 77 to tie for 49th place at 221.

Junior Nick Heinen was one of two Cowboys competing in the event individually, finishing with a 76 to also finish at 220 and tied for 43rd place.

The Cowboys will be back in action on April 7 when they begin play at the Aggie Invitational in Bryan, Texas.