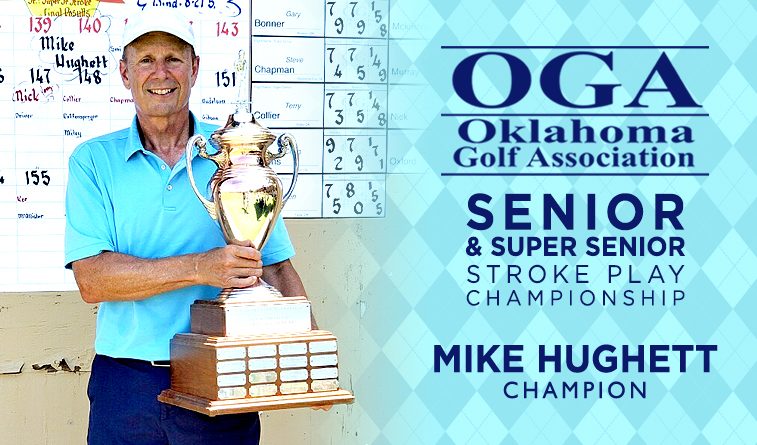 Try convincing Hughett’s opponents of that. For the sixth time – and the second straight year – Hughett prevailed in the OGA Senior Stroke Play Championship, rallying from four shots down midway through Wednesday’s round for a one-shot win over Jeff Smith of Arcadia.

Hughett, who lives in Owasso, sunk a nervy six-foot birdie putt on No. 18 – after Smith had made his own 8-foot birdie putt to heap on the pressure – to finish the round at even-par 72 and the tournament at 4-under 140. The pair separated themselves from the field, with Joel Driver of Oklahoma City a distant third at 3-over.

The recently retired Hughett, who will turn 61 next week, now has won an astounding 22 OGA titles during his brilliant amateur career, to go with two Nebraska amateur titles he won back in the day. He won his first Senior Stroke Play championship in 2009 and followed that with titles in 2010, 2012 and 2016 before his current two-year run.

Smith, who plays out of Karsten Creek in Stillwater, began the day with a one-shot lead, but that advantage quickly ballooned to four shots. Hughett bogeyed No. 4 and No. 5 and on the par-4 No. 7, Hughett hit into a bunker and then fatted his next shot, which didn’t make it out of the sand. He ended up with a double bogey.

“I made it real hard on myself,” Hughett said. “I wanted to get off to a fast start, but I got off to a terrible start and made some bad judgments. I was four back at the turn. I knew I had to start playing steady and hit fairways and greens and there were some birdie opportunities out there. I was able to take advantage of those. Fortunately, my putting held up.”

Hughett steadied himself, recording five straight pars, and Smith came back to him. Smith left approach shots short of the green on a pair of par-4s at No. 10 and No. 11, resulting in bogeys, then three-putted from about 20 feet on No. 12 for another bogey. Hughett finally got a birdie putt to drop on the par-3 No. 13 and all of a sudden, he was tied for the lead.

Hughett reached the green in two on the par-5 No. 14 and picked up another birdie to take the outright lead, but Smith answered with a birdie on the par-3 No. 15, bouncing his tee shot within five feet of the hole.

Smith laid up with his second shot on the par-4 No. 16 and wasn’t able to get up-and-down, dropping him back to 2-under. Hughett hit a six-footer for a par, and made another six-footer for par on No. 17 after hitting his approach shot over the hole, to the sloping back side of the green.

Hughett’s tee shot on the par-5 No. 18 barely stayed in the fairway, but he was able to hit his second shot onto the green, while Smith laid up and didn’t reach the green until his third shot. But that shot was a beautiful approach, giving him a good opportunity for a must-have birdie, which he converted. Hughett was able to match him, though, to seal the win.

The putts on the last three holes “were not easy putts at all,” Hughett said. On the 18th, “I assumed (Smith) was going to make a four the old-fashioned way and I was going to make a four by trying to hit the green in two. I misjudged the first putt terribly – I thought it was downhill and left it six feet short – but the strategy was right. I just didn’t quite execute the first putt … and made it more dramatic. Nevertheless, it all worked out.”

Smith seemed to take the loss in stride.

“You never have it when you’re playing Mike,” said Smith, a former member at Gaillardia who works for a health-care company. “I think 11 and 12, bogeying both of those – they’re not hard holes – was the difference, for sure. Then he birdies 13 and 14 and that’s a five-shot swing in the first five holes of the back nine. Other than that, we played pretty tough. Under par out here for 36 holes is pretty good. I’m happy with how I played; I was just one shot short.”

Hughett’s retirement has freed up his schedule to play in tournaments he hadn’t had time to compete in before. He’ll play in Norfolk, Neb., in a qualifier for the U.S. Mid-Amateur Championship on Aug. 21, and over Labor Day weekend, he’ll play in the Porter Cup, a 72-hole amateur tournament at Niagara Falls Country Club in Lewiston, N.Y. Past champions of that tournament include Phil Mickelson, David Duval, Scott Verplank and Ben Crenshaw.

And he plans to be back looking for a three-peat next year in the OGA Senior Stroke Play Championship.

“It doesn’t get old,” Hughett said. “I love competition. It forces you to really buckle down. It’s nice to see that I can make those six-footers when I need them and can hit some shots when I need to.”

The Super Senior portion of the tournament had a dramatic finish. Jack Steinmeyer of Tulsa had a two-shot lead on the No. 18 tee, but posted a quadruple bogey 9 on the hole. That opened the door for Jerry Nick of Okmulgee and Terry Collier of Bixby, and Nick sunk a birdie putt for a one-shot win over Collier, who parred the hole.

Nick finished at even-par 72 for the round and 3-over 147 for the tournament. Steve Chapman of Oklahoma City was third, two shots behind Nick, with Steinmeyer falling to fourth.