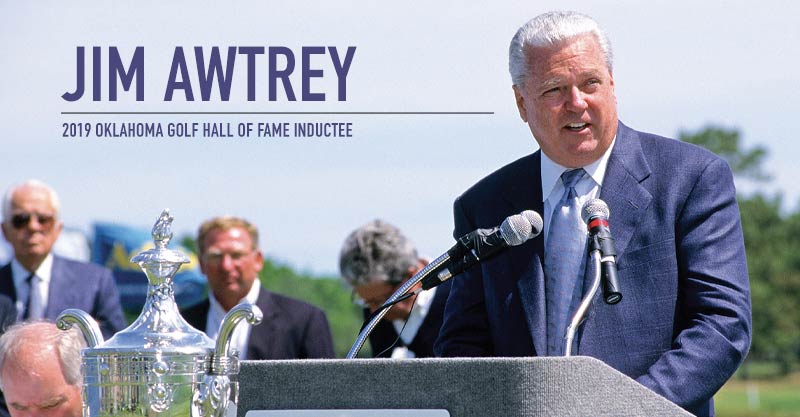 Jim Awtrey’s career in golf got out of the starting gate thanks to a horse.

“My dad had taken me out to the course, but I told him I didn’t want to caddy for him. I wanted to play,” Awtrey said. “So I sold a horse for $100 and bought my first set of golf clubs in the store.”

Awtrey, a 2019 Oklahoma Golf Hall of Fame inductee, grew up in Shawnee, playing on courses with no irrigation and no bunkers.

“We used to have crabgrass-picking parties,” Awtrey said. “We didn’t care about the condition of a course. We just wanted to play. I never even got to see a bunker until I went to Oklahoma City (as a junior player).”

“More than anything else, golf is an opportunity in Oklahoma,” Awtrey said. “I started as a quarterback on the high school football team, but playing golf is something I wanted to do. I always wanted to play on the tour. We’d go out to the Elks Club and play all day long when we were 13 and 14. We’d start in the morning and play until somebody came by to get us.”

Local tournaments are where Awtrey honed his craft – events such as the Cherokee Strip Golf Classic in Ponca City, the Boom Days tournament in Seminole, the Pokkecetu Tournament in Wewoka.

“It was like a mini-tour,” Awtrey said. “Everybody played. College players played. As you got better, the better players wanted to play and you got better. That’s how we really learned to compete. There were a lot of great players that you saw and you aspired to be like them. Oklahoma was just a great place to be and grow up and learn to play.”

Awtrey recalled qualifying for the Oklahoma Open at age 16, which resulted in a unique experience for the junior pro-am on Wednesday prior to the tournament. “There was one woman in the field, and I’m paired with her,” Awtrey said. “All the sudden I look up and I’m like, ‘Wow, she can really play.’ ”

That lady was Susie Maxwell Berning, who would win four major championships on the LPGA Tour – three U.S. Women’s Opens and the Women’s PGA Championship – and 13 pro tournaments total.

“That’s kind of the world we live in Oklahoma,” Awtrey said.

Born in Oakland, Calif., while his father was stationed there with the Navy during World War II, Awtrey arrived in Shawnee when he was 8 months old and would grow into one of only two junior golfers from the area at that time.

Awtrey played at the University of Oklahoma and after graduating with an accounting degree in 1966, he served as an assistant professional for 2017 Oklahoma Golf Hall of Fame inductee Joe Walser at Lake Hefner Golf Course in Oklahoma City.

Fresh out of college, Awtrey spent three years playing on the winter tour to earn money.

“We drove everywhere and we didn’t have a home,” said Awtrey, who was married and a father of one child at the time. “We didn’t have an apartment or a home in Oklahoma. We drove from California, to Florida, traveling in caravans with other players. You do that now you’d say, ‘Well, that sounds stupid.’ But back then, that was the dream.”

“They told me, ‘You play well up there, somebody will come along and sponsor you,’” Awtrey said.

After a brief stint in New York and two years on the PGA Tour, Awtrey returned to his alma mater as head coach from 1972-77, leading the Sooners to three NCAA tournament appearances.

Awtrey’s playing and coaching ability are not what earned him a spot in the Oklahoma Golf Hall of Fame, however. It was a conglomeration of everything he did thereafter.

First elected into the PGA of America in 1969, Awtrey built an unfathomable resume as an executive with the organization that would span five decades.

After leaving as OU’s coach, Awtrey served as treasurer and president of the PGA South Central Section, then joined the PGA Rules Committee and its Board of Directors.

In 1986, he joined the PGA of America staff as tournament manager. Nine months later, he became Executive Director on an interim basis and soon became the first PGA professional to hold the title. In 1993, Awtrey was named the PGA of America’s first-ever CEO, a position he held until his retirement in November 2005.

The PGA of America enjoyed unprecedented success during Awtrey’s tenure. Membership almost doubled to 27,000, the PGA Championship gained in stature as one of golf’s four majors, and the Ryder Cup became the sport’s preeminent international competition.

“We developed a strategic plan early and we were able to get to all of them because we kept evolving and creating benefits out of the money raised,” Awtrey said. “The plan was executed and it was a great time to do it.”

When Awtrey became executive director at the PGA of America, there were only five hours of Ryder Cup television coverage in 1987. At the end of his term, there were 26½ hours of coverage.

It was Awtrey who boldly made the decision to relocate the 1991 Ryder Cup from sweltering Palm Springs to the Ocean Course at Kiawah Island Golf Resort in South Carolina, even though the Pete Dye design was still under construction at the time. Playing in the Eastern time zone rather than the Pacific allowed international broadcast coverage to reach London before midnight. Known as “The War on the Shore,” the United States recaptured the Cup from the Europeans with a 14½-13½ victory.

“It turned out to be one of the greatest moves ever and one of the most dramatic Ryder Cups we’ve ever had,” said PGA of America historian Bob Denney. “I wouldn’t call him (Awtrey) a gambler, but I would call him a man who balanced things so well. He just handled things so easily. He was a man who also believed in the future in the game of golf. He helped build the pathway to diversity and it’s picked up in strength since that time.”

Kerry Haigh, who is the Chief Championships Officer for the PGA of America, noted Awtrey’s vision.

“Jim was able to get the team to work together beautifully, and at the same time he was able to look out 10, 20 years from now. Most of us are looking day-to-day, week-to-week, year-to-year,” Haigh said. “The decision to move the Ryder Cup from Palm Springs to Kiawah at the time may have seemed risky, but in truth when you heard of all the details and the facts that were involved, it really was a very smart and a great decision as the outcome of the Ryder Cup proved to be. Kiawah ended up sort of being the steppingstone to what it (the Ryder Cup) is today.”

Awtrey has served on the national advisory council for the Arnold Palmer Children’s Hospital, trustee/fellow on the Georgetown College board in Lexington, Ky., the Baldwin Wallace College business council, the Digital Media Arts College board of directors and the Palm Beach Fellowship of Christian Athletes.

In 2006, Awtrey was honored with the Donald Ross Award by the American Society of Golf Course Architects and the Metropolitan Golf Writers Association’s Distinguished Service Award. In 2007, he was inducted into Oak Hill Country Club’s Hall of Fame. In 2011, the PGA of America inducted Awtrey into its Hall of Fame.

Since then, he has served as Representative At-Large to the GCAA National Advisory Board. As Arnold Palmer Cup tournament chairman, Awtrey developed the event’s Patron Sponsor program, secured Rich Harvest Farms and Atlanta Athletic Club as host sites and was instrumental in the event’s expansion to include both men’s and women’s college golfers from around the world.

When business took him away from Oklahoma, the 75-year-old Awtrey said he always looked forward to returning.

“All the years and all the pressure and all the things I went through, when I got off the plane or drove into Oklahoma, I took a deep breath and felt like I was in a different place,” Awtrey said. “The energy and the people are different. You walk into a place and people are smiling at you. When I left Oklahoma (to work for the PGA of America), everyone thought I talked funny. But when I get back to Oklahoma, I feel, ‘Hey, I’m at home.’ If I’m there two months, I’ll start to develop an accent again. It was just a comfortable place to grow up.”

Awtrey and his wife, Jeanne, have been married 51 years, live in Windermere, Fla., and are the parents of daughters, Jena and Julie; and a son, Justin.