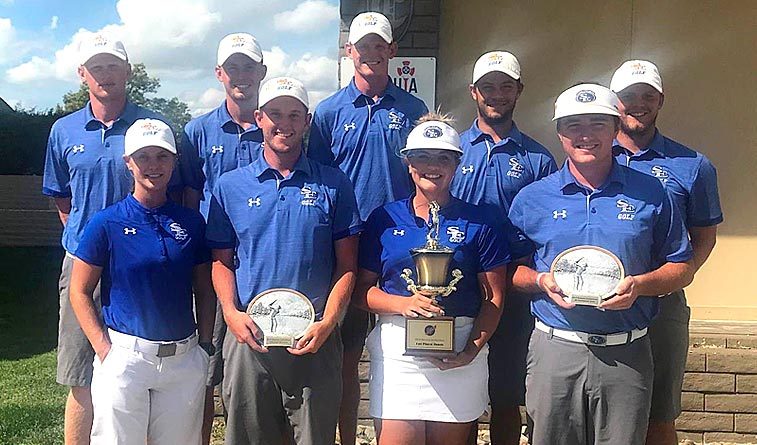 WICHITA, Kan. – Zach James and Hayden Foster maintained their momentum from day one of the Newman Fall Invitational, running away with the top two spots on the leaderboard while leading Southeastern to a tournament victory.

The Savage Storm carded a team round of 287 on Tuesday to finish with a 54-hole mark of 867 on the Crestview CC course in Wichita, Kan., winning the event by 15 strokes over host Newman who finished second.

James was completely dominant atop the board, firing three straight rounds in the 60’s, a feat he has done for the second time in four tournaments. His final round 68 earned him a 206 for the week and won the event by seven shots over Foster. It marks his third-consecutive tournament victory this season

Foster turned in his second-straight 72 on Tuesday and finished the three-round tourney with a 213, seven shots behind James but four strokes ahead of third place.

Ryan Ward finished 13th after carding a final round 77, bringing his 54-hole total to 227.

He was followed by Jordan Holifield who finished with a 78 on Tuesday to post an event total of 229 and finish tied for 17th.

Bryce Hughes rounded out the five squad members and fired a 70 in the final round to check in with a 230 and finish tied for 20th.

The Storm had a pair of players playing as individuals, led by Lenny Trotta who carded a 79 on Tuesday and finished the event with a 239 in a tie for 30th, while Cody Reed put up a 79 in his final round to finish with a three-round total of 252 and in 39th place.

Sophomore Luke Palmowski shot a 3-over 219 to finish fourth. Senior Patrick Bart remained in fifth place with a final round of 1-over-par 73. For the tournament, he posted a mark of 4-over-par 220. Fellow senior Ewen Delampe turned in a top 10 finish as he ended in sixth place overall. Delample shot 2-over-par 74 for a 54-hole tally of 5-over-par 221.