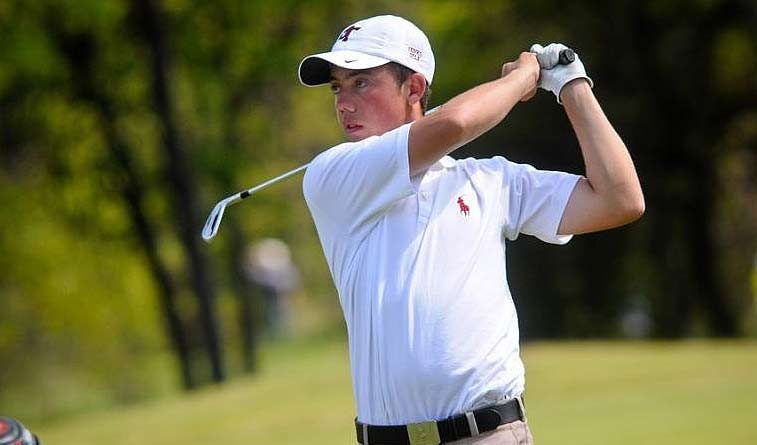 EDMOND – After spending his first summer as a professional traveling the length and breadth of Canada on the Mackenzie Tour, three-time Oklahoma Golf Association State Amateur champion Brendon Jelley of Tulsa has a better idea what it’s going to take to be successful in his chosen field.

“In college, if you shoot at or a little under par you’re doing pretty well,” he said. “Out here, if you don’t go low every day you’re getting passed by. I think the highest winning score in the events I’ve played in was 20-under.”

A good example came just last week, when Jelley shot 10-under the first two rounds and was in the top five, but hung around par in the final two rounds and dropped all the way out of the top 35.

Jelley opened the Oklahoma Open at Oak Tree Country Club with a 3-under 67 Thursday to find himself three shots behind co-leaders Casey Fernandez of Durant and Charlie Saxon of Edmond, who each shot 6-under 64. Will Kropp of Edmond fired a 65 to hold third place alone, while Rafael Becker of Dallas and Chase Hanna of Leawood, Kan., are tied for fourth at 66. Jelley is in a group at 67 that includes Phillip Bryan of Mustang, Derek Chang of Dallas, Luke Kwon of Carrollton, Texas, Chelso Barrett of Keene, NH, and Trent Whitekiller of Sallisaw.

Jelley, who concluded his career at Oklahoma State last spring and turned professional just as his Cowboy teammates were winning the national championship, said he’s found his ball striking more than adequate to compete at the next level, but his putting has been inconsistent.

“When you’re hitting it well and giving yourself opportunities you’ve got to take advantage,” he said. “There have been days I’ve putted well and days I can’t make anything.’

Jelley has watched in awe along with the rest of the tour as Tyler McCumber has won three of the last four events in impressive fashion. McCumber told Jelley his mindset is to go for everything on days when you’re feeling good about your swing.

“I’ve never seen someone just be on in all phases like he has, it’s been pretty impressive.”

Jelley has earned just $4,405 in nine events while McCumber leads the tour with $135,700, also in nine events. Former Oklahoma Sooner Michael Gellerman is currently fourth on the money list with $63,735 and has a chance to earn one of the five battlefield promotions to the Web.com Tour that go to the top five money winners at season’s end.

Jelley travels quite a bit with Ian Davis of Edmond, another former Cowboy who is home to play in the Oklahoma Open, which offers a purse of $10,000 to the winner. Davis shot a 68 and is tied for 12th as 31 players bested par in the opening round. The field will be cut to the low 40 and ties following Friday’s round and currently 42 players are at even-par or better.

That doesn’t include defending champion Max McGreevy of Edmond, who shot a 1-over 71 and comes into the event after struggling through a tough initial season on the Web.com Tour.

Oklahoma Golf Hall of Famer Gil Morgan, who has won seven PGA Tour evens and 25 times on the Champions Tour, was even par through 12 holes but struggled down the stretch and shot 74. Still just having the 70-year-old Morgan in the field is a treat for the young golfers. Morgan won the Oklahoma Open twice back when a host of touring professionals competed regularly.

Tee times and pairings for Friday’s second round are at www.okgolf.org. Complete results from the first round below.