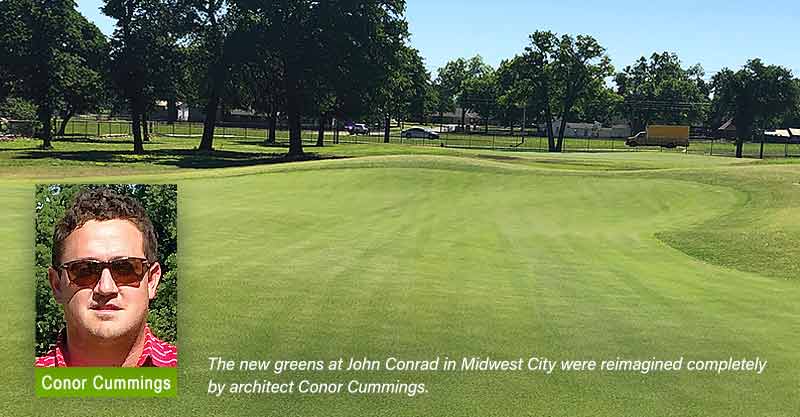 Read about this and more in the June/July issue of Golf Oklahoma. Click HERE to read online or pick up a copy at your local golf course.

When John Conrad Golf Course in Midwest City reopens in mid-July, golfers will have to learn their way around again.

For one thing, the nines are transposed so golfers used to playing the tough opening hole dead into the prevailing wind will now at least get loose before tackling what is now No. 10.

The next thing apparent will be considerably wider fairways and the absence of hundreds of trees, many of which were severely damaged in the freak 2021 ice storm and others which needed to be removed to reopen corridors and provide proper sunlight and air movement for healthy turfgrass.

In addition to the width, many fairways that were previously flat now have gentle mounding and tilt to create more movement, particularly close to the greens.

But the big learning curve will come on the greens. Conor Cummings, a design associate with Heckenkemper Golf, let his imagination soar in creating putting surfaces with a fairly dramatic amount of slopes, rises and falls.

Some have increased considerably in size. Some are framed by mounding that will actually assist the golfer if played correctly. But once on the greens, it’s going to be a learning curve to figure out the best landing areas, ways to approach and how all the myriad of putts one could face will break.

Cummings is hopeful golfers will embrace and have fun with the greens as they learn all the nuances.

“How do you create an interesting and fun golf course experience on a hole that has no bunkers?” Cummings said. “You do it with contour. Both internal (on the green) and external.”

“The greens will be where your score is made when we reopen,” said long-time head professional Larry Denney. “That’s where all the action is.”

The 007 bent grass greens will need to be kept in the 8-11 range on the stimpmeter as anything much higher than that could get dicey with the contours.

The course should reopen in mostly tremendous shape. Some areas that were sprigged instead of sodded will need another month or so of good Bermuda growing weather to fully fill in, but that should be mostly accomplished by opening day. Overall the course is on very attractive gently rolling property and, despite golfers having to put up with rumblings from planes landing at nearby Tinker Air Force Base, it gets high marks on the walk-in-the-park scale.

The course stretches to nearly 7,000 yards from the tips, but has room for tees at intervals down to 4,141 yards. It is not heavily bunkered either in fairways or greenside, but those in use will give golfers pause when cutting off doglegs or taking dead aim at flags. Many however, create an optical illusion of sorts as they are not as close to the greens as they appear from a distance. A great example of that is on the par-3 third hole, where a large bunker on the left that appears to guard the green is yards short of it.

The $4 million renovation also includes a new practice area with a large putting green, a social lawn for events and two other greens that with a variety of tees can be used as a four-hole short course or to settle bets coming off the 18th. Cummings said he’s thrilled with the way that area turned out.

Significant improvements were launched this spring at Page Belcher Golf Course, one of two 36-hole facilities owned by the City of Tulsa and now managed by Troon Golf.

The city directed over $400,000 in earnings from the past two fiscal years into a program of tree removal, grading and sodding that has made a significant difference in the look and playability at both the Stone Creek and Olde Page layouts which had deteriorated dramatically in the past decade to the point of being unsuitable for tournament golf.

To generate further improvements at both Page Belcher and Mohawk Park, a golf advisory committee (disclosure, this writer is a member) is seeking to raise a private match of a $1 million grant of American Rescue Plan Act funds put up by the Tulsa City Council and was approximately 1/2 way to its goal as of this writing. Any individual, business or foundation that wishes to contribute to this can go to  https://tulsacf.org/golf/

The City of Tulsa also committed in its budget for fiscal year 2022-23 to increase the golf operations fund by $856,000, a 31 percent increase. The maintenance budgets at both Page Belcher and Mohawk Park will be the primary beneficiaries.

The first area to receive significant improvement was the back nine of Stone Creek, which was voted the best new 18 holes in the country by Golf Digest when it opened in 1986 but had deteriorated to where many areas were just dirt, rocks and roots due to a lack of sunlight and water. Along with the outside work conducted by Tulsa Tree Doc and JonesPlan, the city has committed to providing adequate water going forward, though a long-term solution to the rates it pays to the Tulsa Metropolitan Utility Authority is still to be determined.

Among the improvement priorities for the committee going forward are significant improvements to the irrigation system at Mohawk Park, bunker renovations at both facilities, cart path repairs, further tree trimming and removal along with grading and sodding.

The PGA of America pledged $250,000 of the $1 million through its new Place To Play program administered under its PGA Reach foundation. That came with the stipulation that the courses hire a PGA professional to begin instituting programs to grow the game at both facilities.

Beyond that, the committee is hopeful clubhouse improvements at Page Belcher and many more deferred maintenance issues could be addressed in the next bond issue.

Golfers will be asked to pay a bit more for green fees beginning in July to help keep the maintenance budgets where they need to be and a discount card program offering heavily discounted rounds at both facilities will be reevaluated. The major issue allowing the courses to deteriorate in the past was maintenance budgets that were less than 1/2 of those of comparable facilities in Okklahoma City and elsewhere.

For the long-term viability of Page Belcher, it remains crucial that a solution is found to the water issue. It uses city water but is charged top rates by the Tulsa Metropolitan Utility Authority, an arrangement in which the authority (essentially the city) would be collecting up to $400,000 annually in water bills from golfers if the courses were watered properly. Instead, fairways have seldom been watered at all for years, meaning the city has been destroying its own courses rather than relent on water billing.

Mohawk Park, by contrast, has access to free water but has been unable to adequately water as well due to irrigation system issues.

Oklahoma City charges its courses about 50 cents per round for water. Many other municipalities in the state provide water to their courses at greatly reduced rates.

Options could be explored including pumping from local creeks (a country club a mile away uses water from a creek and pays nothing for it) or using reclaimed water from a nearby waste water treatment facility.