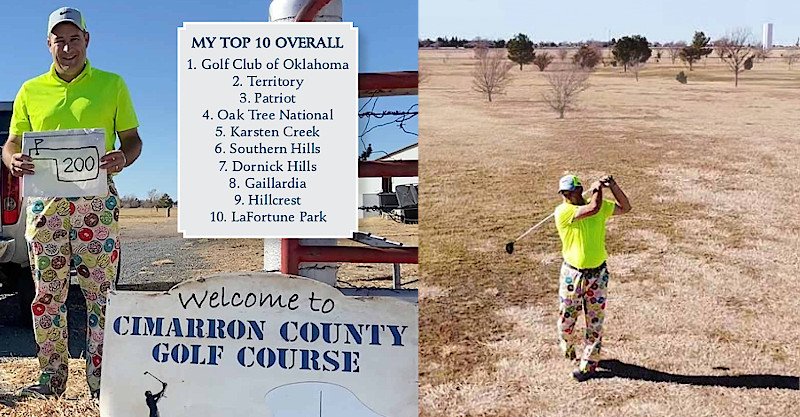 Below is another story from the 2021 Directory and Travel Issue of Golf Oklahoma. Pick one up at your local course today or subscribe online. David Jones, the superintendent at The Club at Indian Springs, will be a guest on the Katrek and McGinness on Tap show next Wednesday at 4 p.m. on the PGA Tour Channel on Sirius XM to discuss his quest to play every course in Oklahoma.

Then there is David Jones.

“I call it a passion. My wife says it’s an obsession,” laughs Jones. “I love everything related to golf. But most of all I love being out there. It’s like you’re in a fantasy land. The game just takes you to another place.” The game has taken Jones, the superintendent at The Club at Indian Springs in Broken Arrow, to just about every place in Oklahoma in which it can be played. Since he played LaFortune Park in Tulsa for the first time at age 15 in 1987, Jones has tracked the courses he has played. As the years went on and he began visiting courses across the state at various superintendent conferences, he decided that it would be cool to make it his mission to play every course in Oklahoma.

In 2013, he played a round at Karsten Creek in Stillwater for his 100th course in the state. In December 2020, he drove seven hours to the panhandle to play Cimarron County Golf Course in Boise City for his 200th course in Oklahoma and 400th worldwide. When he got there a snow storm was on the way and the gate was locked, but Jones dropped his bag on the other side and played.

As usual, he loved it. And when he was done, the course had been opened so he could pay his fee and make another friend.

Perfectly content to play by himself, Jones is accompanied often by his wife Erin, an Australian native of New South Wales, who enjoys the opportunity to travel the state and read a book out in nature while Jones plays on.

As a superintendent, he loves to look at how others in his craft maintain their courses, often on a shoestring budget. He is particularly fond of some of the nine-hole courses he’s encountered in off-the-beaten-path locations such as Shidler, Kingston, Covington, Cordell and Frederick. “I have a fascination for nine-hole courses and there have been some really neat gems out there,” Jones said. “Buncombe Creek in Kingston (green fees $10) is a great layout with good elevation change. Rolling Meadows in Covington is a fantastic little nine-hole course run by a farmer and his wife. The pro shop is in his living room.”

The journey is a sad one in some respects as so many smaller courses have fallen by the wayside. Jones estimates he’s played 25 courses that have since closed and another 22 closed before he got a chance to play them. He remembers pulling up to the gate at Sugar Creek Canyon in Hinton days after it shut down and wondering if he should risk it.

“A few months ago we went down to Hobart and Hollis (far southwestern Oklahoma) and we’re playing these courses and you can see mountains (the Wichita Mountains),” Jones said. “Just seeing the varied landscapes in Oklahoma and meeting the people and getting to eat at all the famous places you hear about has been great.”

Jones, who plays to around a 6 handicap, has had some golf in the kingdom moments on his travels, days when every shot seems destined for glory, though he’s still waiting for that first ace. On other days, he’s had the shanks like the rest of us. But when your only company is the sound of birds or a combine and your gallery is crows and cows, it’s easy to just get lost in the game’s great adventure.

When Oklahoma is conquered, Jones’ next goal is to play in all 50 states before he’s 50, which means 15 states in the next two years. He would also like to play his 500th course overall on his 50th birthday, and wouldn’t mind at all if that 500th course was Augusta National, in case anyone out there wants to help him with that!

“I want to experience as much as I can in life while I’m on this planet,” Jones said. “When you’re out there, it’s never about the score. I think golf is about the next shot.”