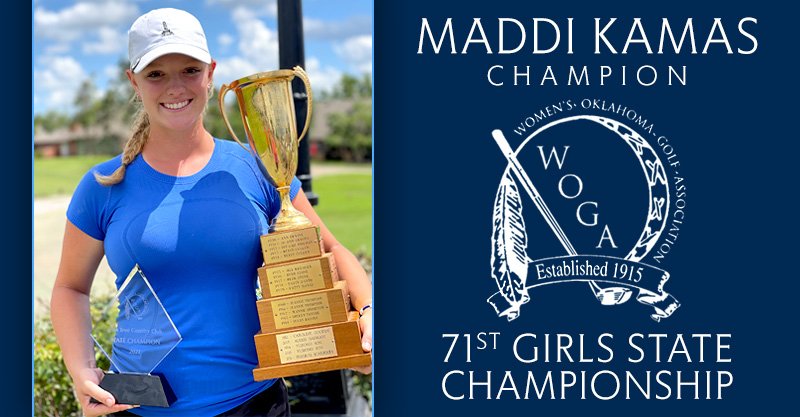 EDMOND (June 30, 2021) – It’s not so much when Maddi Kamas posted most of her birdies, it simply was her ability to do so on an Oak Tree Country Club East Course playing much longer than usual that proved to be the difference for her on Wednesday.

Kamas, from Kingfisher, birdied four of the first seven holes in the final round of the Women’s Oklahoma Golf Association Junior Championship, then came up with a late birdie on the par-3 No. 17 to seal what eventually was a one-shot win over Jenni Roller of Jenks.

Kamas, who finished the two-round event at 3-over-par 145, won the WOGA Junior title for the second time in three years, having also earned the crown two years ago at Quail Creek Golf and Country Club in Oklahoma City. She was the runner-up last year.

“I think I had a pretty solid round,” she said. “I’m pretty happy with it. I hit my driver really good. It kept me out of trouble and my wedges were pretty good after being off yesterday. My putting was pretty good. I’m glad the rain held off today.”

Kamas’ 1-under 70 on Wednesday was the only under-par round posted during the tournament by any player in the field – perhaps not surprising, given that the course was saturated due to rain that’s plagued the Oklahoma City metropolitan area the past week. Pools of standing water dotted the course, including in some bunkers, and tee shots didn’t have their usual roll with the ground so soft.

As a result, birdies were at a premium, as evidenced by the fact the players who finished second and tied for third  (Roller, Raychel Nelke of Pocola and Reagan Chaney of Ardmore) combined for only five on Wednesday, as many as Kamas had all by herself.

Kamas started the round in fifth place at 4-over, four shots behind Chaney, who soon will be her teammate at Oklahoma City University. But birdies at the par-4 No. 1, the par-5 No. 2 and the par-3 No. 4 thrust Kamas into the mix. She nearly had another birdie on No. 5 but missed a short putt and settled for par.

Playing in the next-to-last group, Kamas said she was unaware she was contending for the lead, as the tournament didn’t have live scoring and no one was giving her updates.

“I usually don’t like to know,” Kamas said. “I like to do my own thing. I had no way of knowing. If there are live stats, I don’t check them.”

At the turn, she was 2-over for the tournament and Roller was 4-over. Both were chasing Nelke, who was 1-under, and Chaney, who was 1-over. Nelke struggled down the stretch, with six bogeys over her final nine holes, while Chaney had four bogeys and no birdies during that same stretch. Both eventually finished at 5-over for the tournament, with Chaney posting a 76 and Nelke a 75 on Wednesday.

Roller made a run, chipping in for birdie from behind the green on the par-4 No. 10 and sinking a 12-foot birdie putt on No. 12 to move to 2-over, but she hit her tee shot into the water on the par-3 No. 14 and just missed a 10-foot bogey putt. Meanwhile, Kamas was in a stretch of recording seven straight pars, allowing her to take the lead.

She hit her second shot into the water that lines the left side of the par-4 No. 16, but saved bogey despite putting from off the green. She hit her tee shot on the par-3 No. 17 to within two feet for an easy birdie. That gave her a cushion she needed, thanks to a three-putt bogey on the par-4 No. 18. Roller, in the final group, just missed a tricky downhill 25-foot birdie putt that would have forced a playoff. She posted a 73 for the second straight round.

“I had to come back from the front nine,” said Roller, a rising senior at Regent Prep in Tulsa who’s already verbally committed to play collegiately for Tulsa. “I feel like I played OK today. I fought a lot. I didn’t play great but I hung in there. The course played so hard today. Some of those pins on the last five holes were really tough.”