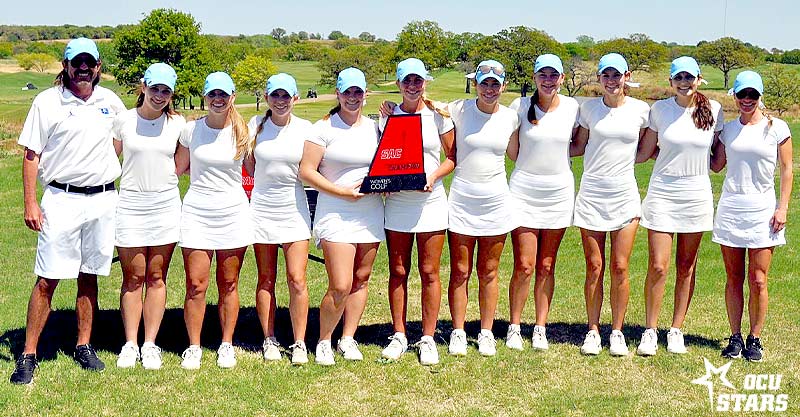 Oklahoma City, ranked No. 1 in the NAIA, delivered the largest margin of victory in the SAC Championships (28 strokes) since 2009. Maddi Kamas took the individual conference title to highlight four Stars who finished atop the player standings.

Kamas grabbed individual medalist by two shots over teammates Reagan Chaney and Rachel Eckert. Kamas, a freshman from Kingfisher, Okla., produced the only under-par 54-hole score of the tournament (71-73-71–215). Kamas made seven birdies over the three rounds to clinch her third victory of the season. Kamas had two birdies and only one bogey Tuesday.

Chaney shot a 75-73-69–217 to came in second tied with Eckert. Chaney, a freshman from Ardmore, Okla., knocked in seven birdies, including three without a bogey in the final round. Eckert put together a 72-75-70–217 to take her career-best finish. Eckert, a senior from Bixby, Okla., tied for the tournament lead with eight birdies, with three birdies and only bogey in the last 18 holes.

OCU’s Natalie Gough earned her third all-tournament nod in the SAC Championships with a 78-68-74–220. Gough, a senior from Bixby, Okla., drained a tournament-high eight birdies as well as the only eagle of the tournament during the second round. Malisone Chanthapanya led Texas Wesleyan with a fifth-place 77-75-71–223 to round out the all-tournament team.