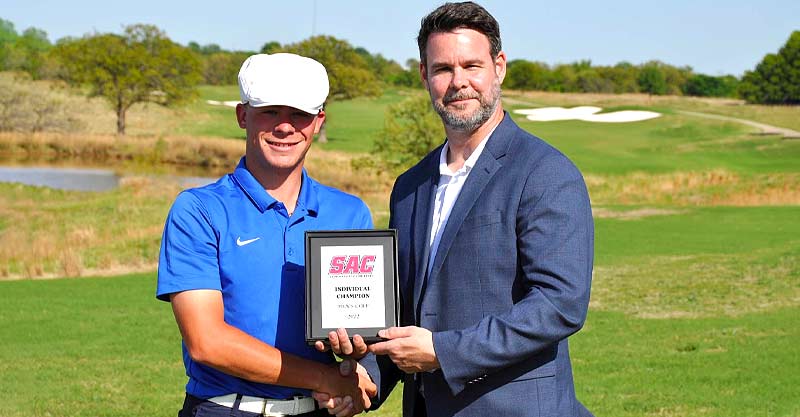 Teeter, a freshman from Bixby, Okla., edged a pair of seniors by one stroke to earn medalist. The Stars, ranked seventh in the NAIA, came in second place in the team race, five shots behind Texas Wesleyan. Southwestern Christian took fourth, powered by top-10 finishes by Matej Babic and Jon David Pitts.

Teeter put together rounds of 69-68-71–208 to notch his first career win. Teeter pulled away from a tie with Sebastien Tremulot of Wayland Baptist (Texas) through 36 holes and withstood a charge from Texas Wesleyan’s Tyron Davidowitz, who tied with Tremulot for second place.

Teeter tied with Tremulot and Dalton Daniel from OCU with 15 birdies to lead the tournament field. Teeter sank five birdies Tuesday with three coming in the final nine holes. Teeter’s previous runner-up finishes came in The Mid-South on Sept. 7-8 at Sand Creek Station Golf Course in Newton, Kan., and the Rose Creek Classic on Oct. 4-5 at Rose Creek Golf Club in Edmond, Okla.

Daniel posted a fourth-place finish for his second SAC Championships all-tournament honor. Daniel, a senior from Newcastle, Okla., totaled a 69-73-70–212. Daniel knocked in five consecutive birdies from the third through the seventh holes.

For Southwestern Christian, Babic finished tied for sixth at 215 and Pitts tied for ninth at 216. All five players finished in the top 20, as Emiel Van Geet shot 219 to tie for 15th and Julian Alanis and Leonardo Ruggieri tied for 18th at 221.

The NAIA Championships will be held May 17-20 at TPC Deere Run in Silvis, Ill. The tournament field and pairings will be announced May 6.