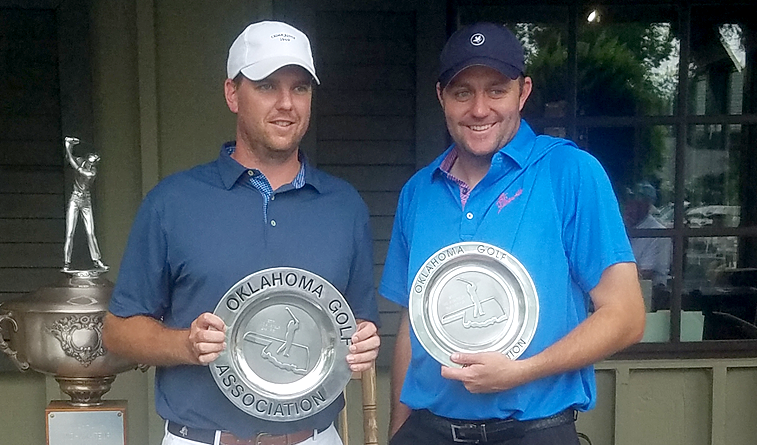 Rob Laird finished second to Austin Hannah on Hannah’s home course, Oaks Country Club, in the 2016 OGA Mid-Amateur Championship. When the event moved across town to Laird’s home track Cedar Ridge Country Club for 2017, he knew it was time to take advantage.

The former University of Tulsa golfer did just that, shooting a 4-under 67 in wet conditions Tuesday to finish at 5-under 137, four shots better than fellow TU alum and Cedar Ridge member Chris Noel (72-69).

Hannah, a former Oral Roberts University golfer who had won the previous two Mid-Amateurs, including 2015 at The Club at Indian Springs, shot 75-73 to tie for sixth.

Noel got off to a hot start despite the early rains, making birdies on holes 2, 3 and 4 while Laird started with four consecutive pars. Noel ran into trouble with bogeys on 5, 6, and 9, lost shots that inevitably dashed his title chances despite a 2-under 33 on the back nine.

Laird’s round took off with birdies on holes 5 and 6. His lone bogey of the day came at the seventh. Laird would start his back nine with a birdie at 10, then make an important 15-footer for birdie at 14.

“The putt wasn’t a sure thing after I mishit the wedge,” Laird said. “There was a lot more work left than I would’ve wanted. It’s always nice to make a putt when you have to, and I was just glad to execute. It gave me enough momentum to believe I could make putts coming in if I had to.”

The putt would give him a three-shot lead, a cushion he would build to four before by the end.

Laird said his familiarity with the difficult Cedar Ridge was a huge factor for both he and Noel.

“The difference came down to how comfortable I was out here,” Laird said. “I expected to be at a bit of a disadvantage because of the soggy conditions today, but once I made par on those first four, it was open sails.”

Tyler Hunt of Tulsa shot even-par 144 to finish third, while Mike Hughett of Owasso and Luke Phillips of Edmond tied for fourth at 147.