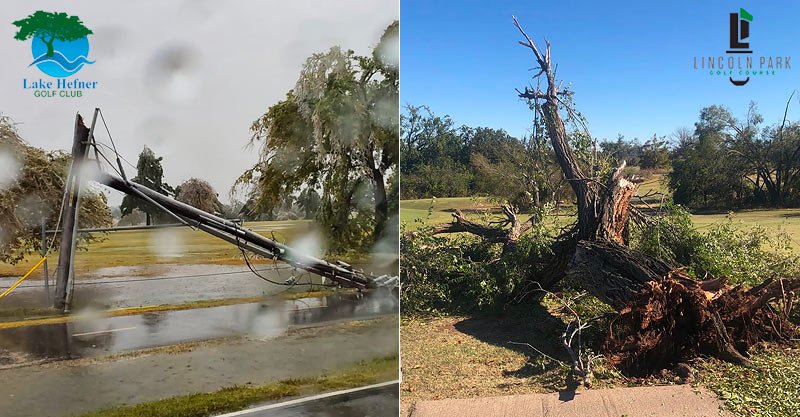 With power still out to more than 100,000 homes in the Oklahoma City area after a devastating Oct. 27 ice storm, golf courses have been struggling to get up and running as well.

Lake Hefner Golf Course, a 36-hole facility in north Oklahoma City, was still without power as of Tuesday afternoon. The course is accepting limited walking-only play on the honor system, basically the course will take your name and phone and expect you to pay for the round when power is restored. Range balls are being sold as well, most other services are shut down.

One thing that Lake Hefner head professional Brad Sliauter, Steve Carson, the director of golf across town at Lincoln Park, and Nathan Neumann, superintendent at Oklahoma City Golf and Country Club could all agree on today. Not a tree on their respective courses went unscathed.

Carson has had power since late last week and the 36-hole Lincoln Park facility has been open since Friday. However he said thousands of trees still have hangers (limbs that are broken but haven’t fallen completely down) and that golfers need to be cautious when getting out of the fairway.

“It’s by far the worst damage from any ice storm I’ve ever seen,” Carson said. “Every tree has some damage. I’m at the clubhouse looking out and can easily see more than 100 large limbs broken off but still hanging in trees. It’s going to take a bucket truck to get them all down.”

Still, golfers have swarmed the course since it reopened last weekend.

We’re busy at least,” Carson said. “Yesterday we were booked until 3 p.m. on both courses. But you don’t want to get under the trees. It’s going to take our crew the entire winter to get all the limbs down, piled up and burned.”

The other two facilities in the Oklahoma City public course system, Trosper Park and Earlywine, are both open but also recovering from severe tree damage.

Newmann said Oklahoma City G&CC had power restored on Friday. He reopened the driving range and short game area today and hopes to have the full course reopened Wednesday.

The course had performed a large tree limbing and removal project associated with its recent renovation and had the trees looking great before the storm. However Neumann said not many will be lost, but most all had suffered at least some damage to their canopies.

“Having all the leaves still on the trees as well as acorns or other nuts just made it so much worse,” Neumann said. “The weight was too much. But we’ll get through this.”

Elsewhere in the state, Rod Alexander, director of golf at Lew Wentz in Ponca City, was audibly groaning as he sat down to take a call, sore from a weekend spent working alongside his crew piling limbs and trying to make the course safe. He said they would have to rent a bucket truck to remove limbs high in the trees that are still dropping before they could allow golfers back on the course.

“We’re a small crew and we can’t get underneath some of the trees until it dries out,” Alexander said. “The grass is still too wet. We were having a great year and the course was in really great shape, so this is a shame. But we’ll get through it.”