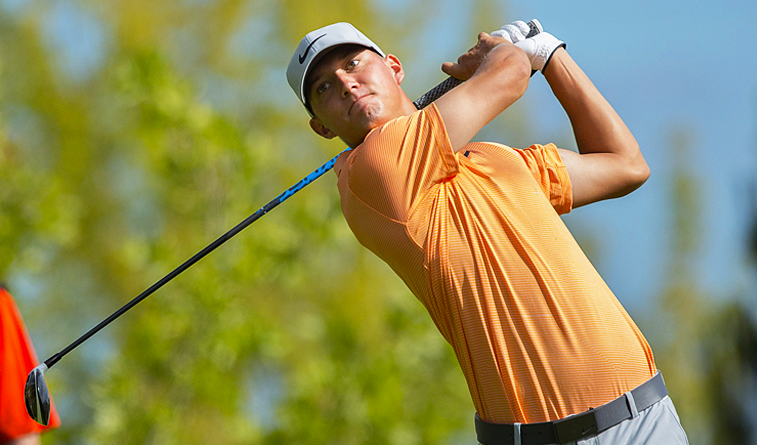 CHANDLER, Ariz. – It was a week of redemption for University of Georgia alum Lee McCoy this week at the Web.com Tour Qualifying Tournament in Chandler, Arizona. After an injury prevented McCoy from playing his Second Stage site in 2016, the 23-year-old made the most of his opportunity this year, posting rounds of 65-67-63-65–260 (-28) to earn Medalist honors and fully exempt status for the 2018 Web.com Tour season.

The victory did not come easily for McCoy, however, who edged out South Korean Sung-Jae Im by just two strokes. The pair entered Sunday tied for the lead at 21-under and quickly turned the Whirlwind Golf Club’s Cattail course into their own battlefield.

“I think it was Jack Nicklaus that was famous for saying that most of the tournaments he won, he didn’t really win, other guys lost,” McCoy remarked. “That was not the case today. I had to go out there and win… we had a great battle out there today. Every time I thought I had gotten far enough ahead and could start playing conservative, he would roll in a 20-footer and it was a little frustrating at times, but it’s nice to be able to push yourself that hard in a big spot and come out on top.”

Here is a link to the complete scores.

The Web.com Tour Qualifying Tournament was a four-day, 72-hole competition that ended on Sunday December 10. The tournament was contested at the Whirlwind Golf Club’s Devil’s Claw (DC) and Cattail (TC) course.

There were nearly 1,000 entries for the tournament, which included previous Pre-Qualifying, First and Second Stages that began in August.

A total of 144 players began play on Thursday morning.