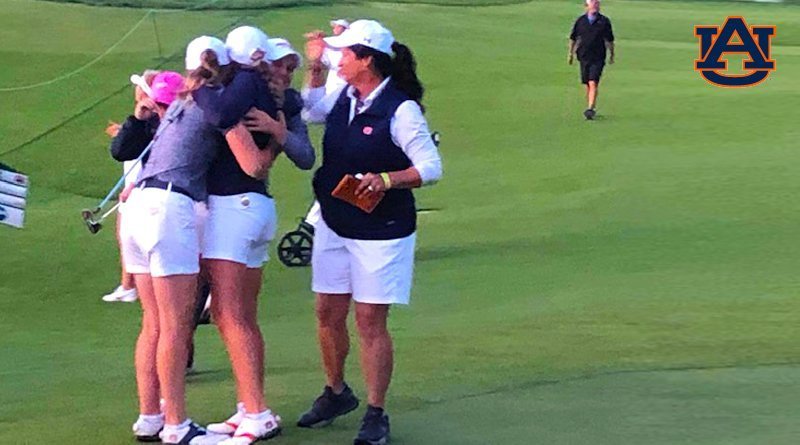 The day’s action, originally scheduled to include both quarterfinals and semifinals, was impacted by severe weather, with a six-plus-hour delay. Both the semifinals and finals are scheduled for Wednesday, with the semifinals teeing off of the No. 1 and 10 tees at 7 a.m., followed by the two winners meeting in the title match at 2:25 p.m.

Auburn, coached by Melissa Luellen (McNamara), former Tulsa All-American and national champion, made a stirring comeback against top-seeded Texas, overcoming significant deficits in three matches to pull out the 3-2 win in near darkness when Brooke Sansom made a birdie putt to edge Emily Hoffman in 20 holes. The Tigers face Wake Forest this morning.

Haley Moore’s putt on 18 clinched the win for the Wildcats as defending champion Arizona defeated Southern California 3-2 in the first decision of the round as she edged Gabriela Ruffels.

Jennifer Kupcho, last year’s medalist, clinched the 3-2 win for Wake Forest over host Arkansas as she edged Kaylee Benton on her 18th hole, sending the Demon Deacons to the semifinals.