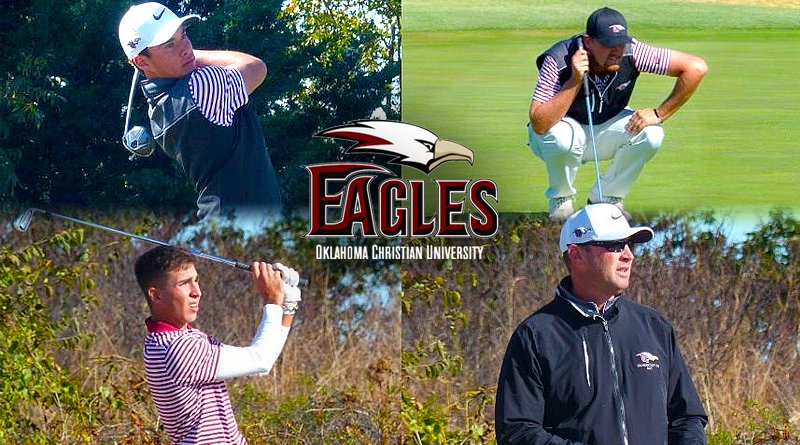 The league’s coaches voted Lynn as the LSC coach of the year, the ninth time in he’s been recognized with a conference award during his honor-filled career. Five of those awards came from the Sooner Athletic Conference and three from the Heartland Conference, including one for the 2018-19 season.

OC’s Trevor Norby and Andres Brictson – named last month to the NCAA Division II All-America and All-South Central Region lists by the Golf Coaches Association of America – each also made the six-man All-LSC first-team list, while Alejandro Armijo received honorable mention. Sixteen players were recognized overall and OC was one of only two schools with three or more players honored.

“It is extremely rewarding to see Trevor, Andres and Alejandro recognized for their performance on the golf course this season,” Lynn said. “The Lone Star Conference is a very competitive NCAA Division II league in men’s golf, with four teams currently ranked in the top 30, so nothing comes easy.

“These three guys work so hard day in and day out to perform at a very high level over a long season and I couldn’t be more proud of all they have accomplished. I am especially proud of how hard they work together to be great teammates. We feel like we have some unfinished business after this spring and we cannot wait to get another chance to compete again hopefully very soon.”

Norby, a senior from Carlsbad, Calif., was a first-team GCAA All-America pick. He finished in the top three in five of OC’s seven tournaments this season, winning twice – in the Jerry Hrnciar Invitational at The Territory Golf Club in Duncan and the St. Mary’s Invitational at The Dominion Country Club in San Antonio, raising his career total to four wins. He posted an average score of 71.56 over 18 rounds, 12 of which were even par or better.

Already a two-time All-American, Norby ended this season as the region’s top-ranked golfer by Golfstat.com and at No. 11 in Division II. He plans to return for the 2020-21 season as a fifth-year senior after the NCAA granted all Division II spring-sports athletes an extra season of eligibility.

Brictson, who qualified for last year’s U.S. Amateur Championship, finished the shortened season ranked 11th in the region and 45th in Division II by Golfstat.com. He received honorable mention on the GCAA’s All-America list and on Tuesday, he was named to the five man Academic All-Conference list by the LSC.

Over 19 rounds during the 2019-20 campaign, Brictson – a junior from Merida, Mexico – posted an average score of 72.68 and had four top-10 finishes, including a win in the Ryan Palmer Foundation Invitational at Tascosa Golf Club in Amarillo, Texas. It was his third collegiate win.

Armijo, a sophomore from Rio Rancho, N.M., shined for the Eagles in his first season after transferring from Oregon Tech, where he earned NAIA PING All-West Region honors as a freshman. Over 19 rounds for OC, he posted a scoring average of 74.00 and had four top-10 individual finishes. He ended the season at No. 17 in Golfstat’s South Central Region player rankings.

Lynn, in his 19th season at OC’s men’s golf coach, already has been named as a finalist for the GCAA’s Dave Williams Award, which is given to the Division II coach of the year.

Lynn guided the Eagles to three wins in seven tournaments during the season, which ended in March due to the COVID-19 outbreak. OC was ranked No. 11 in the final Bushnell Golfweek Division II coaches’ poll. In their six tournaments against Division II competition, the Eagles won three times, finished second twice and third once.

OC posted an 80-4-1 mark in Division II play and didn’t have a losing record against any Division II team, splitting with No. 6 Arkansas Tech, No. 21 Colorado State-Pueblo and California-San Diego while going 3-1 head-to-head against No. 10 St. Mary’s (Texas).

“I am very thankful to be recognized by my fellow coaches as the 2020 Lone Star coach of the year,” Lynn said. “We have some great coaches in our league and I consider it a tremendous honor to represent them. I am very appreciative of all the hard work my team does to be successful on the course and in the classroom. It is a privilege to represent Oklahoma Christian University and compete.”

The LSC’s other individual awards for 2019-20 went to Emilio Gonzales of St. Mary’s (Texas) as player of the year, Tyler Kaman of Cameron as newcomer of the year and Daniel Unger of West Texas A&M as freshman of the year. Like Norby, Gonzalez was a first-team All-America selection.