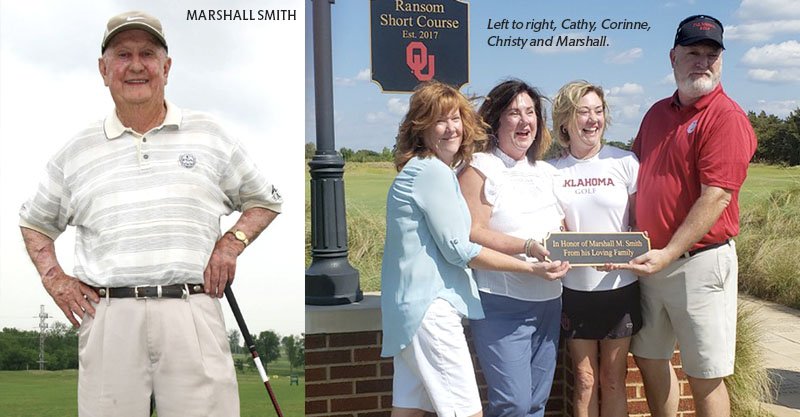 Marshall McLemore Smith maintained a regal omnipresence as a golf instructor in the tri-state region of northeast Oklahoma for more than 60 years. His loving family now has made sure his name won’t be forgotten at Jimmie Austin OU Golf Club.

A nameplate in recognition of Smith will hang at No. 2 tee box on the Ransom Short Course. A gathering was held outside the Charlie Coe Center on Friday afternoon with son Marshall Monroe Smith and daughters Corinne, Cathy and Christy in attendance alongside roughly 30 family members and friends. Marshall and Christy were past members on the OU golf teams. Also on hand were Sooners men’s golf coach Ryan Hybl and GOLF Magazine Editor-in-Chief David DeNunzio.

Afterward, many in the group reconvened at Mickey Mantle’s Steakhouse in Oklahoma City, which was an apropos venue.

Smith and Mantle shared an indelible friendship that spanned 50 years, beginning when they competed in football and basketball as youngsters. Smith grew up in Quapaw, Mantle in neighboring Commerce.

“I couldn’t even have dreamed how well (Friday’s festivities) went,” Marshall’s son admitted afterward. “It was just beautiful and we’re so appreciative.”

Smith, who passed away on Nov. 28, 2013, at age 87, was a regular at golf expos and became a coveted clinic speaker. He served as golf guru to the entire northeastern corner of Oklahoma and ventured over state lines. Seemingly every golfer within a 50-mile radius of his hometown of Miami, Okla., probably crossed paths with Smith at one time or another – ranging from Shangri-La Resort at Grand Lake O’ The Cherokees on Monkey Island, to greater Tulsa, to Joplin, Mo., and Baxter Springs, Kan.

Smith shagged balls for Ben Hogan when he visited Miami for practice sessions in the off-season. Smith served at the altar of former PGA Tour player and longtime friend and teacher Ky Laffoon and implemented his K.I.S.S. swing-thought method for students to “Keep It Simple, Stupid.”

“I like to think I can take what is there and help someone,” Smith once said. “You have to keep it simple and I have an eye to do that.”

Smith got Mantle his first set of golf clubs, crafted his swing and claimed the baseball Hall of Famer could have been the longest hitter on tour had he chosen golf after baseball.

In 2006, DeNunzio authored Smith’s book “A Lifetime of Lessons; More Than 50 Years of Expert Instruction to Help You Play Your Best Golf Now.” DeNunzio also published instruction for Golf Tips Magazine when Smith was in his 70s and 80s. Smith would visit DeNunzio in Los Angeles and venture to Palm Springs for instructional projects. “He would get fan mail,” DeNunzio said of Smith. “They would ask, ‘Who is this Marshall Smith guy? We need more Marshall.’ ”

After meeting Smith, golf writer Tom Ferrell told DeNunzio, “I met a guy who’s 70 years old with a bucket hat on and he will change your life.” Ferrell went on to author “Hit Your Second Shot First” with Smith.

Asked how many lessons he thought his father gave in his lifetime, Marshall Monroe estimated between 400-500 per year to people of all ages and skill levels, which would put his lifetime total somewhere around 30,000-plus, more than double the size of his hometown Miami, Okla. “Later on, it could have been even more,” Marshall said. “He was giving lessons until he was 85.”