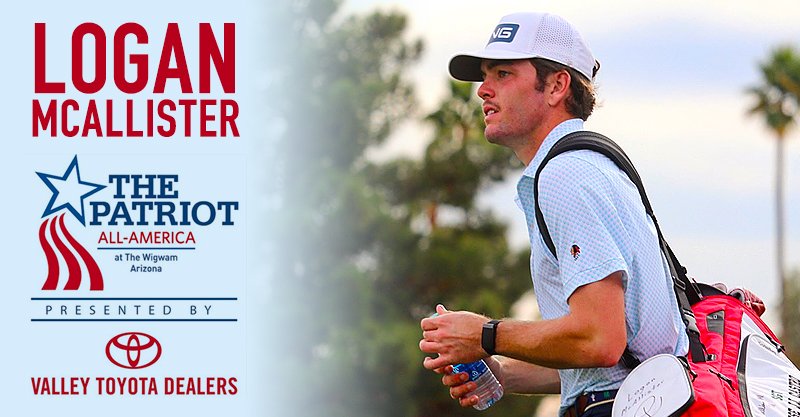 Logan McAllister of Oklahoma City and the University of Oklahoma continued his charge up the leaderboard, shooting a final-round 66 to move into a tie for third at 4-under.

Mason Overstreet of Kingfisher and the University of Arkansas finished tied for 28th at 4-over 214, two shots ahead of Patrick Welch of OU who tied for 39th at 6-over 216. Trevor Norby of Oklahoma Christian tied for 46th at 7-over 217, while Stephen Campbell Jr. of OU was a shot back at 218. Jared Strathe of ORU and Owasso finished 79th at 229 and Bradley Wright of Rogers State was 82nd at 237.

“It’s pretty awesome – I don’t really have words for it,” said Huff, the Eagle, Idaho-native playing in his second straight Patriot All-America. “This is what we work for, to just give yourself the opportunity. Thankfully the cards fell my way this week.”

Huff found himself down one stroke to Bradbury on the par-4 13th hole, before finding another gear down the stretch. Bradbury would bogey 13 to drop to -5, and Huff would birdie three of his last five holes to take home the F-35 Trophy and authentic Air Force leather flight jacket. In all, 83 of the top amateur players in the world made up this year’s 10th Anniversary Patriot All-America field.

“It’s actually funny, I had the same club in I think on the last five holes,” said Huff. “I hit a lot of really good shots coming in and I think I birdied three of them. It was a little bit of a difference maker and put me just enough ahead to cruise through 18.”

Bradbury entered the final round three shots back of Huff, but quickly made up the deficit with birdies on three of his first four holes. The Yorkshire, England-native improved his score each round at the Wigwam (71-67-66), but ran out of steam in his pursuit of the lead.

“It was the perfect start really – the front nine was kind of getable and I took advantage of the getable holes,” said Bradbury, playing in his first Patriot All-America. “It feels good putting your name up there, but to do it at such a good event like this, it means more this week. So it’s extra special.”

For all information on the Patriot All-America, including links to final results, live stream recordings and social media posts, visit patriotallamerica.com.

About The Patriot All-America Invitational

Featuring golf’s stars of tomorrow, The Patriot All-America is regarded as a top amateur event nationally, attracting PING All-America golfers from all three NCAA Divisions, NAIA and NJCAA rankings as well as from universities outside the United States.  The Arizona Golf Association (AGA), JDM Partners and the Golf Coaches Association of America (GCAA) partnering with the Folds of Honor Foundation to host the tournament. For more information visit patriotallamerica.com.